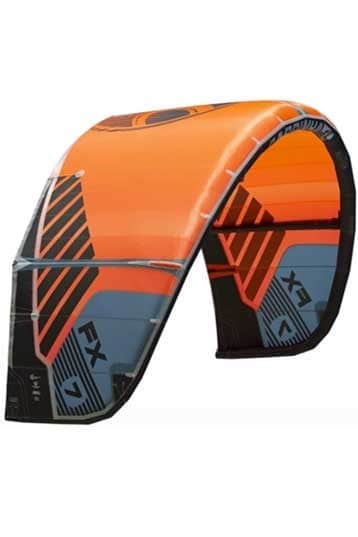 New cloth, new bar feeling: Cabrinha equips the 2020 FX with the new Nano Ripstop cloth. This has a positive effect on flight characteristics and handling. How big is the difference?

Cabrinha's FX hit the ground running with its introduction a few years ago. After that it has become a bit quieter around the freestyler. Not because the kite has gotten worse, but because a large part of Cabrinha's clientele is attached to the performance all-rounder Switchblade, and because the FX has been competing with the in-house moto last year. In its 2020 version, the FX has remained true to its line and is intended to appeal to freestylers as well as sporty freeriders and all-rounders, especially after the elimination of the pure-bred freestyle kite Chaos. In order to make the range of use as broad as possible, Cabrinha continues to rely on three different adjustment options of the bridle, with the bridle's points of attachment at the leading edge allowing the depower and turning behaviour and the position in the wind window to be adjusted. Cabrinha is also introducing a new cloth in 2020. With the Nano-Ripstop material, the load threads are much closer together than with conventional cloths. Cabrinha promises twice the durability with the same weight. In addition, the cloth will make the canopy stiffer and less stretchy. We tested the FX with the Overdrive Quickloop 1X Trimlite Bar. Compared to the previous model, it has a new asymmetrically shaped bar spar that is supposed to fit better in the hand and new, significantly slimmer bar ends. The bar does not look as massive as the old overdrive version, but unfortunately the very practical and quick to use width adjustment system has been abolished. The new one can also be adjusted in width by pulling out a plastic cap at the bottom and turning it by 180 degrees, but this is a bit more tricky and takes longer than the old click system.

Immediately after the launch you can feel that the new Nano-Ripstop cloth is an upgrade for the FX. The predecessor already convinced with its high flight stability, but the new one is still a bit more saturated and stiff in the air - although our test model already arrived with a few flying hours on its back. The airfoil is spick-and-span, the canopy does not twist noticeably and also hardly creases when depowering. The FX does not afford stalls either. In short: everything is perfect.

The new FX has also gained on the bar. While the previous one had a direct effect on the bar, the new one is a little softer and more robust. The feedback and direct response to steering commands has improved slightly, although the Cabrinha is not as ultra-direct as the GTS or Union. The holding forces are in the golden midfield with very slightly reduced steering forces. Too bad: The bar lacks a universal semi-suicide option. The metal ring on the safety line is small, so you inevitably need a leash with a large carabiner to hook into the loop. This is sometimes a bit impractical for unhooked tricks.

The FX has lost nothing of its sporty flight characteristics. The pivot point is outside the tips, so the kite turns cleanly and produces constant pull. With an appropriate bar turn, it can also be circled in smaller radii. The flying speed is in the middle range.

The FX is very well balanced in terms of flight performance. Its basic pull is in the middle of the range compared to the test field, but it offers a little more low end than the average. Positively perceived, even by climbers, is its distinct sheet-and-go ability, which is very good for a freestyler. The depower is amply dimensioned and gives the FX comfortable reserves in the high end. The kite is still easy to rein even when it is powerfully fried, although it offers slightly less depower in the freestyle setting than in the other two settings. The FX also scores points for simplicity when going upwind, pulling far to the edge of the wind window and producing evenly powerful propulsion without requiring corrections.

The FX also requires a little more jumping technique when hooked in. This is typical for this kite category. It should be steered in with a strong impulse and the jump should be clean. Then the FX is powerful, but not as explosive as Union or GTS. The lift unfolds a bit more gently, but with the right wind force, even with the twelve-meter kite you can still reach appealing jump heights with medium hangtime. Due to the good feedback the jumping feels intuitive, you always know where the kite is and small corrections are carefully implemented. When jumping underneath the kite is very forgiving and in most cases drifts backwards until the line tension is restored. Unhooked he shows a rock solid, but not an outstanding picture. The pop is decent, although not as explosive as the freestyle specialists. The same goes for the slack after the jump. Since it stands right instead of up, it is less prone to steering errors after unhooking.

The new FX shows the same broadband characteristics as its predecessor, but the new cloth makes it look a bit stiffer and more direct - a real upgrade. Although some kites still deliver a little more unhooked performance, the FX knows how to combine its versatility with a sporty and at the same time extremely easy handling, which pleases professionals and doesn't overtax intermediates.