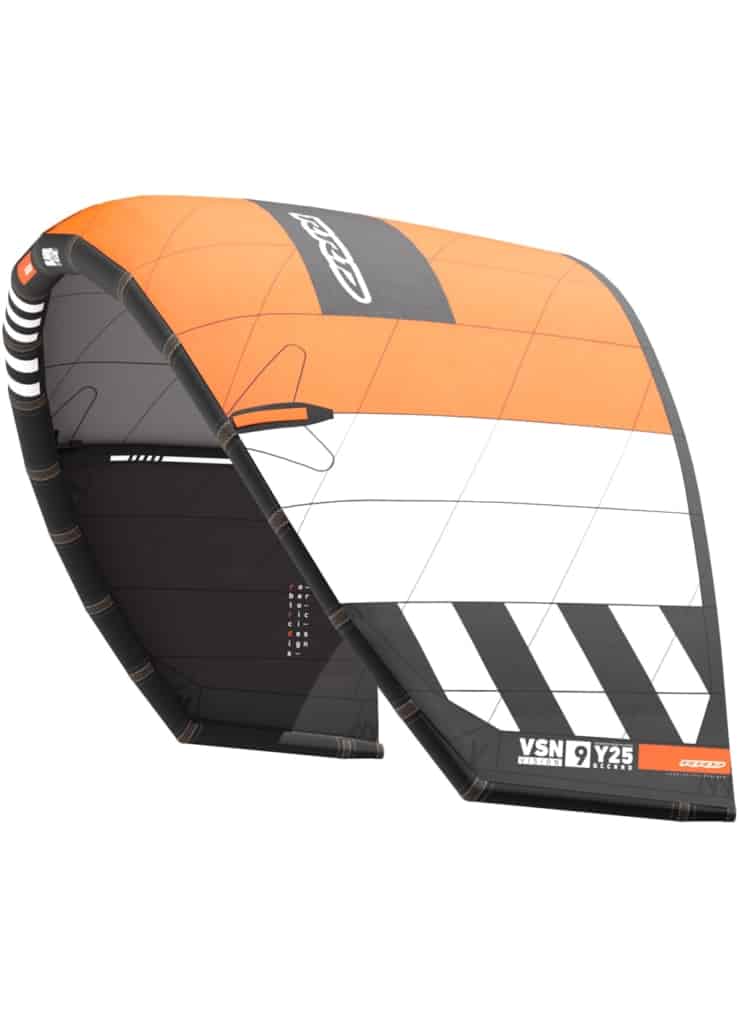 A Review of the Power Machine: RRD Vision Y25

RRD has turned its Vision inside out. The toothless entry-level kite of yesteryear has become a powerful all-rounder - the only thing that has remained with the new Y25 version is actually the name.

Already when inflating the RRD-typical high-quality workmanship is noticeable. Dacron reinforcements, numerous patches, elaborate seams: The Vision appears "rock solid" constructed. RRD uses a Techno Force Double Ripstop for the canopy. The cap is supported by three struts and corresponds to a hybrid shape with a strongly rounded leading edge, relatively much sweep and angular, wide tips. In addition, the arc is more open, which suggests a high projected area and a lot of steam. The all-rounder is positioned by RRD in the freeride, freestyle and wave segments and comes in six normal sizes and three additional light wind sizes between 12 and 15 square meters.

In the air, you immediately feel the powerful character, because the Vision tugs more powerfully on the hook than the competition in a direct size comparison as an eight as well as a ten. It is full and, above all, calm in the air. You could be forgiven for thinking you were flying a performance freerider with five struts. The relatively thick profile gives it maximum stability and the frame seems very stiff. In addition, the kite is quite well balanced. In light wind you get it fully powered to the stall point, but it is quite forgiving when oversheeted. This underlines the still high boarding ability. Stall tendencies could not be elicited from the Vision. Only in gusty winds does it pass on the increase in power quite directly, even if you actively depower with the bar.

You really have something in your hand with the Vision Y25! This applies to both the bar forces and the feedback. Compared to the competition, the steering and holding forces are the highest. This goes hand in hand with excellent feedback. The bar lies calmly in the hand and immediately conveys a lot of confidence and control. The steering has little play, but compared to the more wave-heavy all-rounders, you have to grip a bit more firmly to apply the steering impulses.

The performance of the Vision Y25 on the water

The splayed cap with the thicker profile is a small power plant, but not a Formula 1 car in the air. The Vision turns nice and smooth and builds up more pull than the competition. On the other hand, it is one of the slower kites and needs somewhat larger radii to change direction. With a strong bar impact, tighter radii are also possible, but you have to apply more force in the arm. The smaller the size, the higher the agility. Compared with the agile Bandit S or Nexus, the ten feels ponderous, while the gap is not quite as large with the eight.

Of course, the powerful character also has advantages: In the low end, the Vision scores the highest marks. Thanks to the high basic pull, you can also fly it one size smaller if you don't like it quite as powerful, thus increasing agility. If you're into blasted twintip riding, you certainly can't go wrong with the Vision. But you should take into account that the enormous power comes at the price of a comparatively manageable high end. The depower works well dosable and linear, but fully depowered remains even in the normal wind range still slightly increased residual pull.

Jumping - This is where the RRD can show off its power. Although a strong steering impulse is again necessary for the jump initiation, so that it changes the direction of flight quickly enough, and you feel slightly increased lateral pull before the jump, but whoever holds against it with the edge is rewarded with a rich lift and long hang time. The jump height is in the middle range. The jumps are very forgiving and safe, even if the timing is not perfect. The Vision has this advantage over many of its competitors in this test. It jumps like a classic freerider.

Conclusion of the Review

Full power is the motto of the Vision Y25. Those who like it powerful and attach less importance to maximum agility may take it into the shortlist. In particular, freeriders who only go into the wave every now and then will feel comfortable on the Vision. For directional purists, it might be tuned a bit too freeride-heavy.

Share on TwitterShare on FacebookShare on PinterestShare on WhatsAppShare on Email
Follow Us On Instagram
Follow Us On Facebook
Table of Contents hide
1 RRD Vision Y25
2 Test & Review
3 Features
4 A Review of the Power Machine: RRD Vision Y25
5 Flight Stability & Bar Feeling
6 The performance of the Vision Y25 on the water
7 Conclusion of the Review