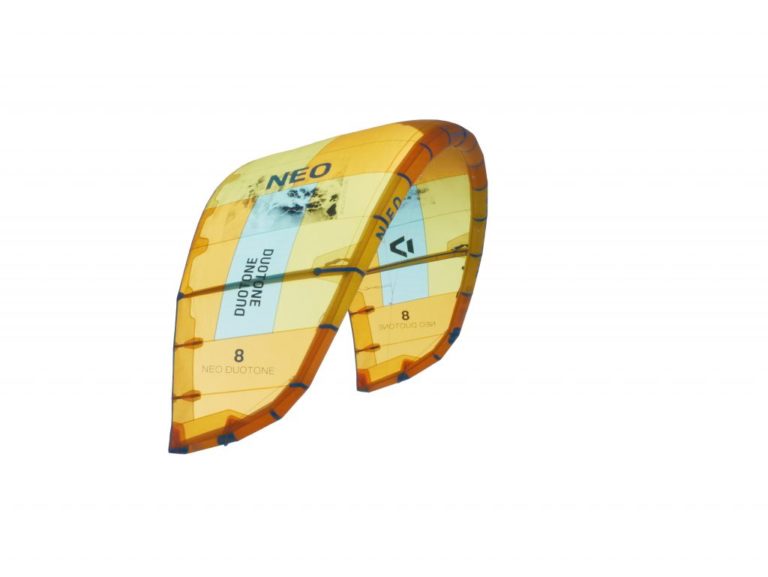 Even the new brand name has not changed the orientation of the world champion glider. It continues to present itself as a high-performance wavekite with precise handling and excellent drifting characteristics, which are now also very popular with foil riders. In order to provide wave pros with the perfect tool, designer Ken Winner, in close cooperation with Airton Cozzolino, Matchu Lopes, Sebastian Ribeiro and Patri McLaughlin, has specialized the kite even more, without compromising the freeride characteristics, which were also very pronounced last year. The basic concept of the Neo has remained the same, but a few small details have been changed for the new season. Longer leading edge segments have made it possible to increase the diameter of the front tube slightly and to make the profile a little deeper. As a result, the wing stands lower in the wind window, shows a more constant power development and more power overall. The curvature of the leading edge arch has been flattened a little bit in the middle, which shifts the contact points of the bridle further outwards, which should effectively prevent backstalls. As with all kites from Duotone, this three strut frame is also equipped with the high quality Trinity-TX cloth, which is exclusively used only on Duotone kites.

The Duotone Neo on the Water...

With the modifications to the front tube and bridle, the Neo once again secures the top position in this genre when it comes to attractiveness in light winds. The kite can be flown with confidence at a very early stage, making even upwind flying no great challenge. If it enters the wave after crossing the white water, the kite reveals its true abilities. The drift characteristics are among the best in this comparison. Like nailed to the sky and switched to standby, the Neo is waiting to be resuscitated by control impulses and to support the pilot powerfully again. Due to the linear power output, it remains easy to control for a long time, which makes it more suitable for less experienced kiters and strapless fans. Only in the area of the absolute high end the power development is a bit more progressive and the power management at the bar should be more sensitive. The trimming possibilities at the balance allow an alignment to more or less depower. The glider can be whipped backwards when jumping and releases a pulling force that will carry you to the official height even if you lack the necessary technique. Also the hangtime does not have to hide at all. If the appropriate technique and the right pair of eggs are brought along, even record hunts in the Woo-ranking are possible with this kite in the upper wind range. The Neo also achieves top marks in the relaunch. By simply pulling on a steering line, the kite launches exactly where it lies, or crawls gently triggered towards the edge of the wind window, where it waits for the starting signal standing on the tip.

Professional big wave slasher or leisure ripper: With this kite Duotone provides the optimal answer to the longings of the wave fraction. Compared to its predecessor, the more constant power curve and the more stable stance in the sky are particularly noticeable, which at the same time brings increased comfort values. An aspect that should please experts as much as novices on the Directional.

Share on TwitterShare on FacebookShare on PinterestShare on WhatsAppShare on Email
Follow Us On Instagram
Follow Us On Facebook
Table of Contents hide
1 Duotone Neo 2019
2 Test & Review
3 Features
4 Duotone provides the optimal answer to the longings of the wave fraction
5 The Duotone Neo on the Water...
6 Conclusion

What a lovely Kite!