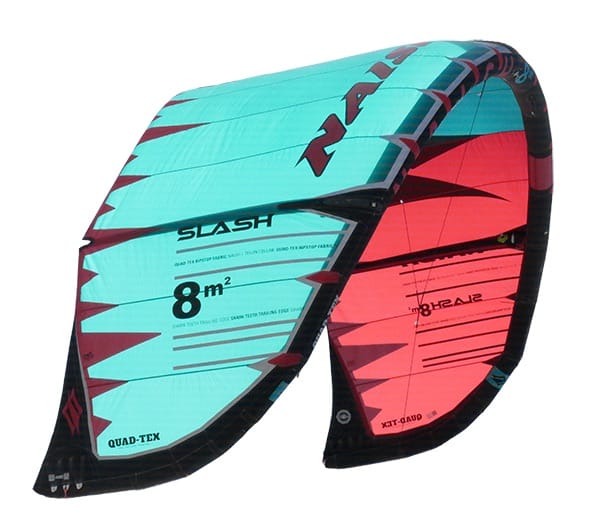 The greatest passion of water sports legend Robby Naish is riding the waves in Hawaii and this is where the birthplace of slash is located. With an uncompromising design, the kite was developed for wave-slashers who are not only looking for an agile acrobat, but also need a kite that can be relied on in the most extreme situations. For the 2019 season, the designers have worked especially on increasing the flying speed and making the construction more robust without increasing the overall weight of the kite. The completely redesigned leading edge is now even more backwards in the tips area, which should increase agility. The front tube is even more robust this year. The low-stretch material allows a significantly higher filling pressure, resulting in a more stable basic structure. This is written down in the middle of the front tube, because nobody else would come up with the idea of applying such high pressure to the glider. For the model tested here in eight square meters the recommended filling pressure is 11 psi. An elementary component for the kite's longevity is the Quad-Tex flying cloth used by Naish. In combination with this cloth, which has four load threads, some Dacron reinforcements were superfluous and were quickly discarded. Brand new this year is the so called Bladder Lock, which fixes the end of the bladders to the tip end with a folded Velcro patch, which prevents them from slipping in the strut. As with all kites from the Naish kiteboarding range, the Slash also features the striking Trailing Edge in Shark-Teeth design, which allows for more harmonious power curves.

The Slash doesn't need much wind to get going. His strong character wants to get straight to the point and does so profitably. As soon as the current is present and the rider goes to the edge, the wing pulls far forward to the edge of the wind window, which makes upwind running easy. All in all, the kite gives a very harmonious setup with low bar forces and still good feedback about its actions in the sky. And this is also necessary, because agility and a directly responding steering behavior are the cradle of the wave fanatic of Hawaii. In rough conditions and in the high end, the effective power management of the Slash shows. By simply pushing the bar forward, the kite immediately reduces its distinct pulling power and suddenly presents itself quite tame. Without a lot of fluttering it drifts, flown upright, almost bored next to its rider, continuously waiting to be chased off again with an unerring steering impulse. This is where the real surf feeling comes up and you can forget about the glider for a few seconds. Another positive thing to mention is that the controllability is maintained to a very high degree when de-powered. If you want to start jumping with the glider, you only have to give a small steering impulse to the back and the slash shoots up. The result is enough for much more than just getting out of the impact zone in a tricky situation. The hangtime is in the upper midfield.

Whether drifting or fast steering, the Slash delivers in any kind of waves and conditions, and at a really high level. A glider that is simply fun to fly, because there is no lack of basic power or jumping ability to fly over one or the other ridge.