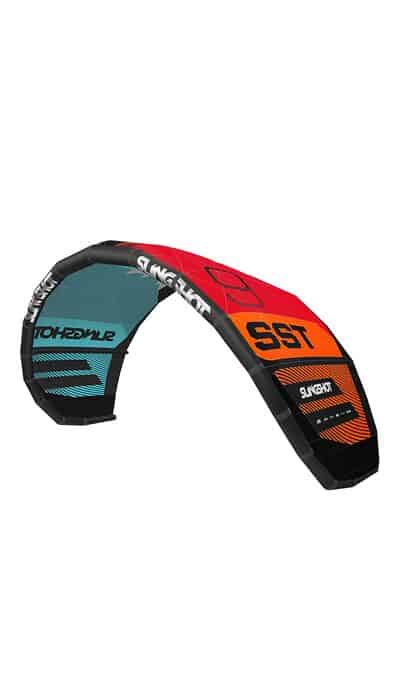 Slingshot delivers with the SST one of the most powerful wave kites. Its good drift, agile handling and direct steering characterize the whirlwind.

Slingshot chief designer Tony Logosz has reworked the SST in its fifth edition. The most striking innovation: The complete flight cloth has been replaced by a new 4×4 ripstop material from Teijin. The total of eight ripstop threads that run through the cloth are designed to make the kite more stable and durable. In addition, it should improve flight stability, especially in gusty conditions. The shape is still based on a compact Open C platform with three struts. The tips, which are pulled down a little, are wide and slightly rounded, the leading edge is typically wave kite strongly rounded. Practical is the ultra short IRS Bridle. It was designed in such a way that it cannot wrap itself around the tips in case of a wash. Instead of pulleys an elastic band is used. The trim can be adjusted with the pigtails of the front and back lines by three knots each. Otherwise, the SST leaves an extremely solid impression with a multitude of patches and reinforcements as well as doubled seams in the most stressed areas. The frame of front tube and struts is, again typical for Slingshot, designed with a relatively large diameter, giving the kite increased stability and stiffness.

You can feel this immediately in the air. The SST stands clean, full and solid in the sky. Due to the stiff frame the SST does not start to wobble even in very gusty conditions. The profile works cleanly over all angles of attack and the kite shows no dents or significant rustling in the cloth. We could not find any stalls either, so everything is fine.
Bar Feeling: At the bar the SST feels very full. This is due to the extremely direct tuning, which is even more apparent with the shorter 20-meter lines. When the extensions are mounted, it feels a bit more subdued, but still offers very good feedback. In addition, the bar lies pleasantly calm in the hand. The SST requires medium holding power and slightly lower steering forces. The sufficiently large sweet spot is well defined and easy to feel. The only small criticism of the bar is that the Adjuster wraps itself around the depower ropes, the bar spar or the steering lines. It can be fixed with a magnet, but unfortunately it is too weak on the chest to fix the rope permanently.

Powerful, agile but homogeneous, the SST turns in freely selectable radii. It turns rather over the tips and does not plate, which ensures a homogeneous power development. If desired, it can also be forced into very tight turns with a little more bar impact. The flying speed is in the upper midfield. In stronger winds you should not set the loops too high, because then the SST produces quite hefty bangs. Especially with the short bar, the direct steering gives you that sports steering wheel feeling. At the same time it scores with its intuitive controls.

The low end varies with the line length. Although we like the handling with the 20 meter lines better, in low wind conditions you should install the extensions. Basically the SST is one of the more powerful kites in this segment. With its high basic pull and its stiff, stable skeleton it also appeals to heavyweights. But in the high end or with too few kilos on the ribs, the end is a bit earlier. It can be easily controlled with the linear depower and is still easy to control even when depowered, but the limit in the high end is smaller than with Bandit S, Section or Neo. The upwind performance depends on the trim. If you adjust it so that it sits a bit deeper in the wind window, it takes two more strokes to reach the peak again. With slightly shorter center lines it will move further to the edge of the wind window and run upwind properly.

In grumpy Cape Town conditions, the high bottom line has to be managed even with a fiver. If you like to surf with power and steering, you should carefully chase it through the wind window. Although it doesn't produce quite as brute power as Religion and doesn't shoot forward as aggressively, it can take careless, light pilots off the board in gusts. Heavy kiters, on the other hand, can enjoy the power to the full. A further advantage is that you can fly it in smaller sizes. Especially in side-off conditions you should do this anyway to avoid being pulled out of the wave. In drift he knows how to convince. It floats stably, requires no corrections and can be reactivated without delay. Especially in side-on conditions, it can make full use of its agility and good drift. It floats along for a super long time and can be radically steered in again immediately afterwards. Here his low position in the wind window helps him.

Sporty, agile, powerful, but still easy to fly, the SST presents itself in its fifth generation. Especially in combination with the short bar and 20-meter-lines the setup is quite successful. Due to its lower position in the wind window it offers full stability and enormous drift potential. Only those who don't like it too powerful or who are flyweights will either fly it a size smaller or go for the gentler competition.