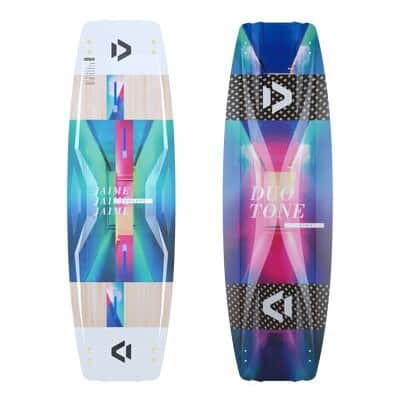 20 years old - and not a bit stale. The Jaime from Duotone has constantly developed and is still one of the top freeriders after two decades.

The Jaime can be called the mother of all performance freeride boards in good conscience. It was first introduced in 2002 as part of the first board line of (then) North Kiteboarding. This makes the 2021-Jaime the 20th (!) version and probably one of the oldest kiteboard lines ever. Congratulations on the anniversary! Like all Duotone twintips, the Jaime is manufactured in Capita's "Mothership" factory in Austria, where the entire manufacturing process is CO2 neutral. The shape of the board is dominated by the Double Diffusor, which can best be described in halfway simple words as double concave, single convex and equipped with channels. The top side is equipped with grab rails in the center area, which not only invite to Indy Grabs, but also make board-offs more comfortable. Biaxial glass fibers wrap around the wood core, carbon is only used on the bottom side in the form of a fishnet pantyhose. This makes the flex slightly tighter than on a pure glass fiber board, but of course it remains softer than on a full carbon board.

The jubilee jaime is as lively as ever. It can be easily accelerated even with little power in the kite and can be directed very precisely in every riding position. It reacts sensitively to every steering impulse. In our test field it is one of the most direct boards together with the Raptor. When distributing the weight, a lot of pressure should be put on the rear foot, because if you go too far forward, the grip suffers and the front fin can catches a little bit. But if you stay in the back, you have a wonderful agile board on your foot, which sprays kilo's of fun. Carving is not one of the paradise disciplines, but after a short break-in time and with an active style of riding, it's easy to succeed. The Jaime is actually the reference board when it comes to performance freeride.

So it's not surprising that you can tickle extreme performance out of its hull if you step on it properly. The pop without kite support is at the top of the list, and even if you use the kite for the lift, you can achieve top marks. Its tail offers just enough guidance so that even overpowered you won't be picked up unexpectedly, but doesn't tend to give you any steering impulses when you already feel you're in the air. On landing it becomes clear why Duotone gave the double diffuser in the underwater hull its impressive name. Even hard, fast touchdowns, where normally zero margin for error is calculated in, are surprisingly effortless - and above all, knee-gentle. It doesn't feel like you're quickly regaining control, but rather as if you've never given it up. If you go into the overpowering range with the Jaime, you need a bit of strength in your thigh in addition to the right technique. Whoever struggles this hard gets a lively handling and a board that does not seem to be overstrained in any situation, but rather encourages more. With over 900 Euro including NTT binding, the Duotone is also far ahead of the field in terms of price. If you take into account the CO2-neutral production in Austria and the rich equipment, you get a lot for your money. In addition, the new design makes it look simply turbocharged.

The Jaime remains true to its line as a freerider brimming with performance. With an overpowered kite, a little riding skill is required, but in normal wind conditions the board is easy to keep under control and scores with great dynamics. The large fan community it has built up over the last 20 years is no accident.

hallo..I am 54 yo, 82kg and 2 years kitesurfer (Greece-Elafonisos)..now trying my first smaaaall jumps. I have a Shinn Monk Mental 135x42.I tested for 10min a Jaime Textreme 136x41 2 days ago and I liked that I felt very stable on the water.Can you tell me if you know the real difference betweet Monk and Jaime because I 'm in mood to change my board..thank you