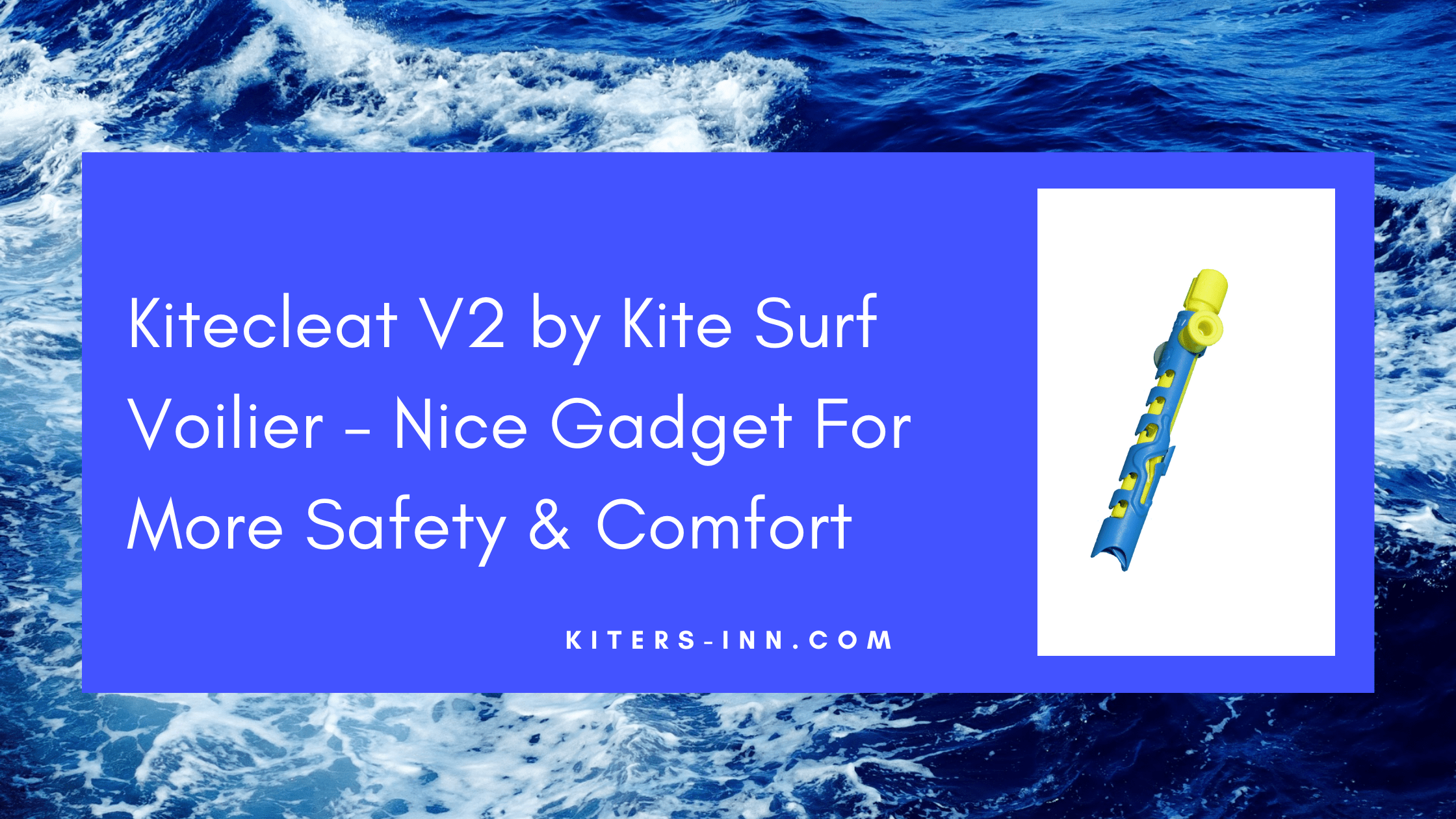 Share on TwitterShare on FacebookShare on PinterestShare on WhatsAppShare on Email

A small gadget that makes kitesport not only safer, but also more comfortable? That's what the Kite Surf Voilier promises. We were able to take a look at the second version of the Kitecleat.

The Kitecleat is an invention of the french company Kite Surf Voilier. The first version has already been sold over 2500 times. Now a revised version, the Kitecleat V2 is offered. You can find the official webshop at: kitesurfvoilier.fr

The Kitecleat has two features. On the one hand, a cutting edge is installed, with which the kite lines can be cut quickly and easily in an emergency. Anyone who has ever experienced a deathloop, will have wished to have a Kitecleat with them. 🙂

On the other hand, a spring mechanism is built into the Kitecleat V2. In this can be attached with a handle the kite lines, as shown in the picture. This feature is especially useful to be able to wrap the kite lines always properly around the bar. For this purpose, at the end of a kite session, the Kitecleat is attached to the lines below the kite and then wrapped in the bar. The next time you roll up the bar, you will notice that there are no tangles. Especially when you have to set up the kite in a tight environment, like on a boat, the Kitecleat makes the work easier.

Kite Surf Voilier designed the Kitecleat like a cross, so the gadget can be easily rolled along on the bar, but also easily stowed in the neoprene. Included is a flexible cord to attach the gadget.

There are three different styles of the Kitecleat. The construction is the same, only the material changes. The price ranges from 19.90€ to 39.90€, depending on the material. Shipping to Germany took only a few days. You can find more information on the Kite Surf Voilier website.

The quality of the Kitecleat is very solid. The advantageous construction makes the gadget resistant to sand and water. The functionality could convince us, the lines are very easy to unroll, if they were previously rolled up with the Kitecleat. Also, the installed cutting edge does what it should. We have cut some older lines to test, this is done without much physical effort. All in all, a great gadget for every kitesurfer!

If you are still undecided, watch the official video of the Kitecleat by Kite Surf Voilier. There all features are shown again.

By Silas on April 26, 2021
A drinking bottle for the wetsuit - how is that supposed to work? That was our first reaction when we heard about the SurfStraw. Of course, we had to take a closer look and ordered a sample package. In this blog post we present our experiences with the SurfStraw and one thing we can say […]
Read more

By Silas on March 10, 2021
One of the largest manufacturers in the kite market Core have introduced yesterday their first own kite foil board. It was only a matter of time until Core will expand their product portfolio also in the foil boards - so now it has happened, Core introduces the SLC Foil. Who knows the products of Core, […]
Read more

By Silas on February 26, 2021
A small gadget that makes kitesport not only safer, but also more comfortable? That's what the Kite Surf Voilier promises. We were able to take a look at the second version of the Kitecleat. The Kitecleat is an invention of the french company Kite Surf Voilier. The first version has already been sold over 2500 […]
Read more

By Silas on February 17, 2021
Especially kite beginners who are looking for a beginner kite, ask the question: Which kites are suitable for beginners? To help you decide, we present our TOP 5 of the best beginner kites. What makes a good beginner kite? There are now many very good kite manufacturers, which makes the market a bit confusing. In […]
Read more

5 Things to take care of when buying a beginner kite

By Silas on January 26, 2021
Buying your first own kite is usually a difficult step. Meanwhile, the kite market has become very confusing due many suppliers. Every major kite manufacturer usually offers a beginner-friendly kite model. In this article we would like to give you a few tips on what you should look for when buying a beginner kite. Buy […]
Read more

Impact Or Floatation Vest For Kitesurfing?