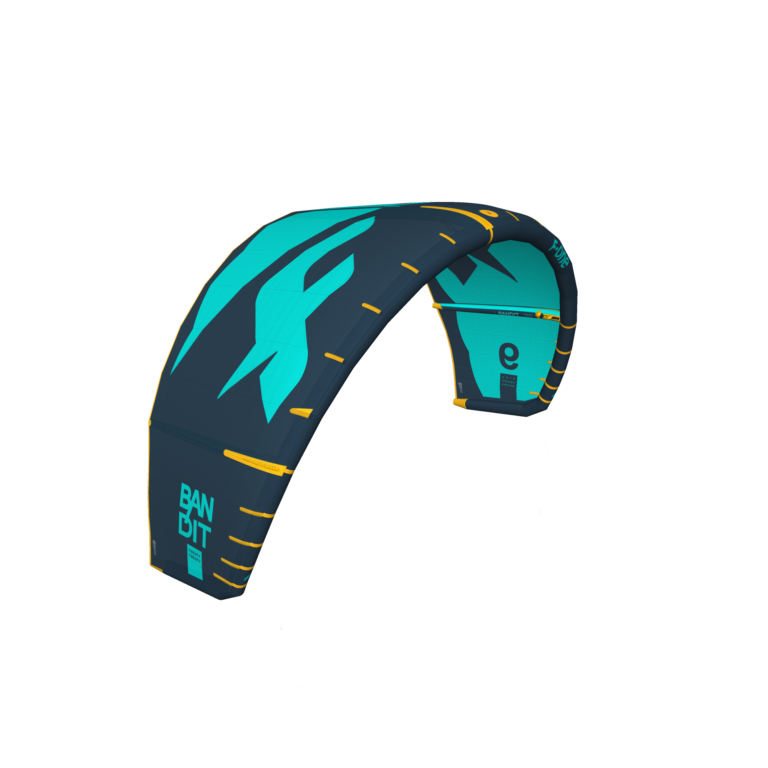 The new Bandit 2020 covers the freeride freestyle big air segment. The Bandit's canopy, profile and bridles have been reworked for this purpose. The 2020's more angular cut tips immediately catch the eye compared to its predecessor. The former primordial delta now has a few more C genes inoculated. The five-point bridge with two pulleys supports the leading edge far into the center.

Held by the scaffold with three struts, the cloth stands taut in the sky. The leech flutters almost not at all anymore, which puts the already good predecessor in the shade. The canopy is well balanced and does not tend to front stalls and finally not to back stalls anymore. Even small turbulences don't shake the stability at the edge of the wind window. Even if you look critically: There is nothing to complain about.

The taut suspension as well as the newly shaped tips are also noticeable on the bar. The feeling on the bar is very direct and offers enormous feedback. The sweet-spot is clearly defined and the feedback when steering and taking turns is excellent even in kiteloops. The steering and holding forces are located in the mid-field and work well together. Fortunately, the only shortcomings when handling the bar are just details: The separately guided safety rope unfortunately doesn't turn with you when you untwist the front lines, so that it twists in itself during many rotations in the same direction. Furthermore, the loop of the depower-tape sometimes dangles in the way.

F-One has built a eleven whose turning speed shaves many a figure eight! The Bandit is as fast as an arrow, both in forward flight and when turning. The excellent bar feedback is a great help to keep the French hummingbird under control.

Simply pushing the bar away may not be enough at some point, but if you know how to use the edge of the board, you will be happy to have high reserves. Amazing are the low cross pull and the stable position in the wind window. Even in gusty winds, the Bandit doesn't bounce nervously back and forth. F-One rightly gives the Bandit the image of the all-rounder. In every game he cuts a great figure. With little wind on the foil it pulls far to the edge of the wind window and allows good courses on the wind without slowing down the foil too much. Unhooked it stands clean and shows sufficient slack for most maneuvers. Kiteloops with the Eleven feel like with a nine, that's how fast the gyro is complete - the pull is moderate and the kite will willingly fly back up to catch the pilot. Big Airs really deserve this name with the Bandit. There is enough drift in the wave to line up turn after turn in onshore conditions. No matter what the discipline, whoever is on the Bandit has more than a say in the matter.

When jumping in the lower wind range, the difference between a perfectly executed jump and a rigged jump is only marginal. Jumps in this wind range are not so easy to mess up, as the Bandit covers the distance from charge to jump position in record time and can be precisely controlled throughout the entire flight phase. With more pressure and jump height, perfect timing becomes increasingly important. A clean jump at the right time together with the right glider control makes the difference between an unmotivated looking hop and a massive big air. The steering is amazing: Due to the fast and precise reaction the kite can always be maneuvered to where you need it. At the same time the kite does not suffer from nervous twitches in the air when the bar is fully powered. If you jump under it, the Bandit usually drifts backwards until it is back at the edge of the wind window.

The F-One Bandit 2020 is an excellent allrounder for those looking for a fast, direct kite with lots of power. The rapid flight and turning characteristics complement the precise steering perfectly and it is fun to push the kite through the wind window at record-breaking speed. When jumping it requires a little more technique than the five strutter, but whoever hits the jump shoots himself to the moon.