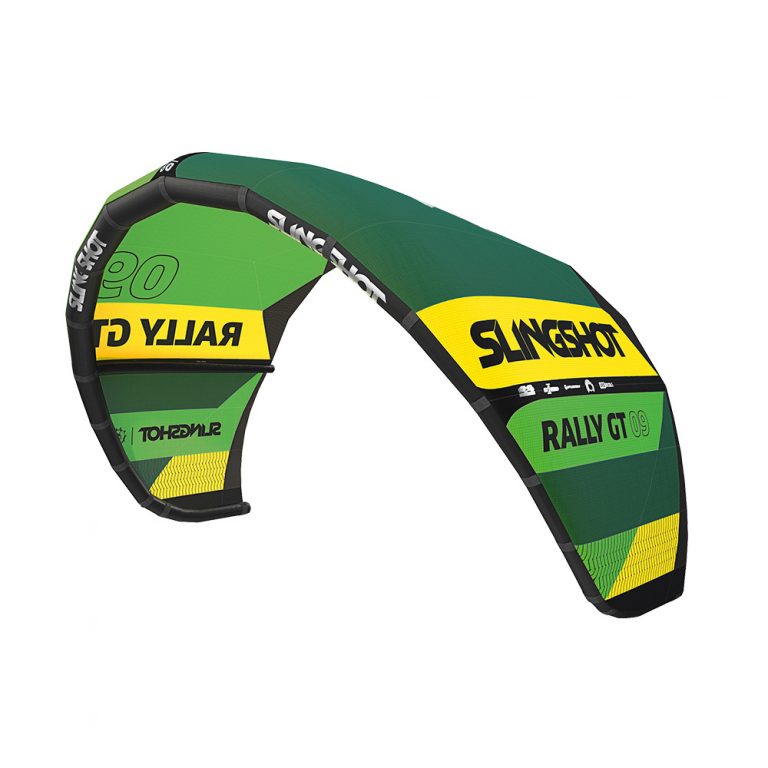 Slingshot Rally - a name that is closely associated with terms such as: Freeride, Big Air, Wave. A kite that has earned a solid place in the kite market for quite some time. Whether beginner, advanced or professional - Rally can be found everywhere. Since this year, he has now been given a new identity - the shape has been changed, the sizes varied and the name adapted. For 2020, the Rally should be even more plug & play - simplify kiting and maximize the fun. Whether this has worked - in this review.

Quality & Processing of the Slingshot Rally

The Rally GT is available in 2020 in sizes 3, 6, 9 ,12 & 14 sqm. To the predecessor, the canopy has been redesigned - the tips became more compact, the aspect ratio lower - the kite generally easier and more playful. As always, there is no fixed design at Slingshot - so hundreds of color combos are represented on the beaches of the world. The Rally GT is flown like all Slingshot kites with a 4-liner bar with deep V and a single frontline safety. The quality is - as we are used to from Slingshot - incredible and bombed proof. No gliders are built this strong. All critical zones & points are reinforced - and not too scarce.

The Performance On The Water

So off to the water. Due to the size restriction, the range composition has become very simple - that takes a lot of time to think about it. The range harmonizes perfectly - only instead of the 14er we would have liked a 15er or even 16er. The new shape is immediately noticeable at launch. The Rally had a relatively pronounced downward tendency due to its strong delta design - this has been completely eliminated with the new shape. In addition, the train is now distributed much more pleasantly on back & front lines. On the water, as always, the pleasant basic draft is noticeable. The current is directly on and requires no correction. The low end is still in the top league - in contrast to its predecessor, however, it has been scaled back somewhat. On the other hand, the high end is much better. The glider stands a bit deeper in the wind window, which is a real boon especially in gusts and hack. In addition, the more compact tips provide a much rounder turning - kiteloops with the 9er are now really fun and are perfect especially for those kiteloop beginners.

In general, jumps have become even easier. The kite forgives not perfect timing and carries you far up in the air - but the hangtime is a bit lower than its predecessor.

So further and off into the wave. The above described deeper stance in the wind window together with the better turning also makes for a much better wave ride. The glider drifts similarly well as the in-house Slingshot RPM but is still a tad faster. Especially the 3 could become an interesting storm kite - even if with few days of use. Unhooked has also been done a lot. Meanwhile, the Rally even has some slack - perfect for the first steps in any case.

And what else remains to be said? Relaunch is very easy, upwind running top and safety works flawlessly.

A great kite with a gigantic range of use. A clear and correct further development towards an ever improving kite. Now perfectly placed between RPM & Raptor. You have questions about the Rally GT? Feel free to write us a comment!