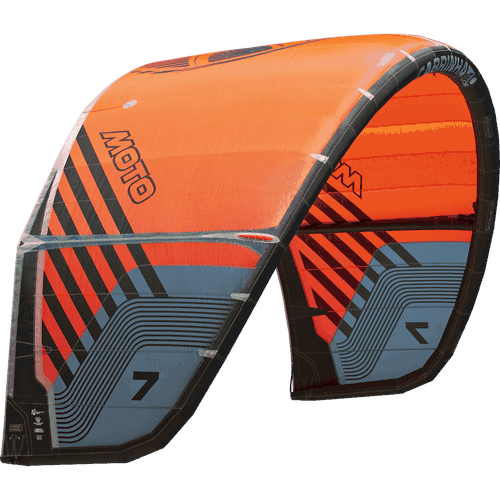 In the second generation, Cabrinha has carefully updated the newcomer Moto: New cloth and a modified Dacron layout should give him a little more performance.

The moto is still relatively fresh in the Cabrinha kite range. In model year 2019, the new all-rounder was released into the air and pushed the radar out of the Hawaiian line-up. More sporty and trimmed more for performance, it should fill the gap between the Wave-Kite Drifter and the performance freerider Switchblade. Target group: Freeriders, Wave-Kiter and Foiler. Cabrinha uses proven construction methods: The new Nano-Ripstop cloth is supposed to provide increased stiffness, stability and durability. Cabrinha promises: twice as strong, but not heavier than its predecessor material, conventional Double Ripstop. In addition, the layout of the Dacron panels has been revised compared to the 2019 model. The more economical use reduces the weight of the canopy and should have a positive effect on handling. The three-strutter is directly suspended on a bridle without pulleys. The aspect ratio of the hybrid canopy lies between the switchblade and the drifter. In addition, the profile of the canopy is relatively flat and the tips are quite straight and only slightly tapered.

The Official Moto Video by Cabrinha

The Moto performance on the water

In the air the Moto in its second edition shows itself to be mature. The canopy stands cleanly in the air, the air flows around it without wrinkles and the cloth tension is high throughout. Even when fully powered or at its maximum, the Moto will not lose its composure. Likewise one does not need to fear any front or back stalls. The stall point is very generously dimensioned so that the Cabrinha kite will not overstrain even beginners who cling to the bar vehemently.

On the bar, the 2020 Moto has even gained a touch compared to its predecessor. Possible explanation: The stiffer cloth pays off. Although the bar forces are still in the very pleasant lower midfield, the moto provides precise and direct feedback. The bar feeling is slightly dampened and is integrated between the ultra-direct Core Nexus and the slightly softer suspended Duotone Evo. At the same time, both sizes look nice and homogeneous.

In flight and turning, the Moto strongly reminds of its wave relative Drifter, reacts directly and above all quickly to any control impulse. At the same time the moto acts so filigree that you can actually fly it with two fingers, and is forgiving enough not to punish every little steering mistake immediately. The airspeed is in the upper midfield of this group. Nexus and Bandit S turn even faster and tighter. The moto is characterized by its round and homogeneous turning behaviour. At the same time it can be dosed well. If you give it a good grip, you can let it spin almost on the spot.

The moto manages an amazingly good balancing act of high flying speed and agility and still has a good basic trait. Compared to the competition it delivers the best low end. It can be revved up in the lowest wind range with a few sinus curves, but can then be flown early in the morning. The High End is seen differently by testers of different weight classes. While lighter kiters would have wished for a few more reserves on the Directional, heavyweights can control it for a long time without any problems. This is of course where his enormous depower helps him. It can be dosed linearly via the bar and remains controllable even in a widely depowered state. It is also good-naturedly suitable for beginners when running uphill. Its slim profile moves far to the edge of the wind window and produces very even propulsion without excessive cross pull. This allows good upwind angles to be achieved even with little edge use.

The first moto test of the 2019 model was mainly about its freeride potential. The mixture of high flight stability, the direct steering, his fast turning behaviour and the enormous depower is the best prerequisite for wave riding. On top of that comes its amazingly good drift behavior. Even in onshore conditions, you can let the moto drift over short distances without line tension, without it sagging or tipping over from the sky. The canopy is well balanced. And even if the kite is set too low, it is enough to build up line tension for a short time to get the moto up again. Some competitors need longer to do this or they will sink in the backstall first. Bonus point: Even the tenner is still fast enough for the wave.

Easy to hit jump, little lateral pull and a neat lift. The moto can't keep up with the big air machine Switchblade, but it does a good job compared to its competitors. Enduro and Vision deliver more hangtime, the Nexus is a bit more sporty. For lighter kiters or those who like to jump well blown up, the moto delivers very good performance.

Mature allrounder - the Moto is one of the kites in this group, which should appeal to both freeriders and wave riders with balanced high performance in both categories. In addition, it does not have any real weaknesses. If the Switchblade has too much steam and the Drifter is too wave-heavy, Cabrinha's Moto could hit the mark.