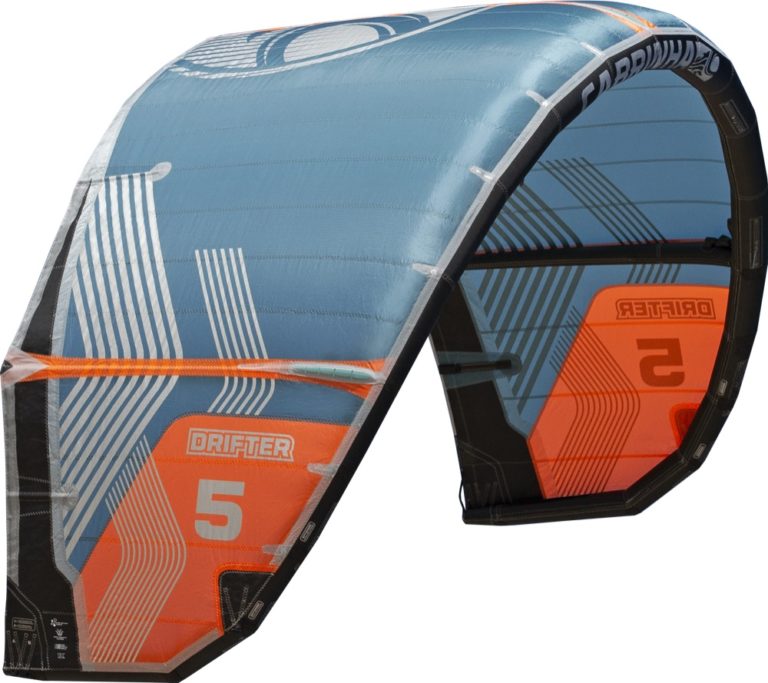 Review and Test of the Cabrinha Drifter 2020

Cabrinha cuts the 2020 Drifter out of a new cloth and at the same time cuts down on the total weight. The canopy should now be stiffer and lighter at the same time. How noticeable is this?

Cabrinha's Drifter has built a solid reputation in the wave community over the past few years. This is probably due to the fact that this kite is named after its name. After all, drifting is one of the most important core competences of a wave kite. No wonder that Pete Cabrinha and his team only carefully revise the kite from year to year to maintain the popular characteristics. In 2020, the Drifter was cut from a new cloth. The nano ripstop material is interwoven with much tighter load threads than conventional ripstop cloths. This should improve the durability as well as the stiffness of the kite. Furthermore, the layout of the Dacron panels has been optimized to save weight. Dacron was saved especially in the area of the tips. The lighter a kite is constructed, the more advantageous its handling is, especially in the lower wind range. As with its predecessor, Cabrinha uses an adjustable bridle on the 2020 Drifter. Various attachment points can be used to determine whether you want to fly the kite in an onshore or offshore setting. Through the settings the kite changes its position in the wind window and either stands deeper in the onshore setting or moves further to the edge of the wind window in the offshore mode.

In the air, the drifter has not lost any of its stability, despite a slimmed down Dacron frame. The flight stability is still at a top level. Neither fives nor sevens can afford a faux pas and we stand stapled in the air. The cloth tension is very high, so that no dents appear in the canopy. The profile remains stable even when widely depowered. Drifter pilots never need to fear stalls.

Typically Cabrinha, the steering and holding forces are in the middle range. You don't have much in your hand, but you can feel the kite precisely at all times. The tuning is a bit softer and not as pithy as the Section, Religion or SST. Nevertheless the Drifter convinces with its precise feedback. The kite can be blindly located in the air at any time. The slightly muffled feeling has a positive side effect: The bar lies wonderfully calm in the hand and hardly rattles at all even in grumpy gusts. Furthermore the bar offers a relatively large sweet spot. This simplifies handling even for inexperienced wave novices.

The small diet did the drifter good. Compared to the predecessor, he was able to increase his flying speed minimally. It is not a hornet as fast as an arrow like Bandit S or Section, but especially when flown with sideshore you can feel that the Drifter wants to fly forward. For beginners and intermediates it is noticeable that even the five-man is well controllable and does not march off like a wild elephant. It could also increase its turning speed. The radii are in the narrow to medium range for both sizes. Its precise implementation of control impulses is particularly noticeable. Only in onshore conditions, when the lines are not fully tensioned, does the Drifter appear a little slower than the competition. If you don't hammer the kite fully up when inflated, the canopy can twist a little more and turn tighter and faster.

The Drifter is characterized by its immense wind range. The basic pull is in the medium high range. SST and Religion offer even more power in idle speed. In the high end it can be controlled comfortably for a long time due to its lush depower. However, the less powerful Section and Bandit S offer even greater reserves in the upper wind range. The depower works linear and can be finely adjusted. Only it can't be completely deadlocked when the bar is completely advanced. Then of course the controllability suffers a little bit. When going upwind, the Drifter is undemanding towards the kiter and willingly pulls upwind with good angles.

Let's start with the name-giving characteristic. The drift of the Drifter is also excellent in the 2020 version. Both side and side-on, the kite flies very well on almost sagging lines and requires hardly any corrections. Even positioning errors are generously forgiven. Down the line you feel a little more pull when the kite is flown with the steering. Then it could really use a shot of more depower, especially with lighter riders. He reacts quickly to all steering commands, but doesn't do them as quickly as Section or Bandit S. This is more noticeable onshore, because then he wants to be steered with a little more emphasis to avoid appearing sluggish. Pleasant, especially on onshore: It can be repositioned very easily and reliably and flies super stable even over longer distances backwards. This makes it possible to get the odd extra turn even in bad conditions. Both sizes seem to be very homogeneously tuned, so that you don't have to change over when changing. At Side-off it flies enormously stable when set and can be dosed wonderfully soft over the bar, if not flown at the limit in the High End.

The 2020 Drifter is still one of the most complete wave all-rounders, which scores points above all for its easy handling, good drift, wide range of use and reliability.

We have already written a review of the Cabrinha Drifter 2019.