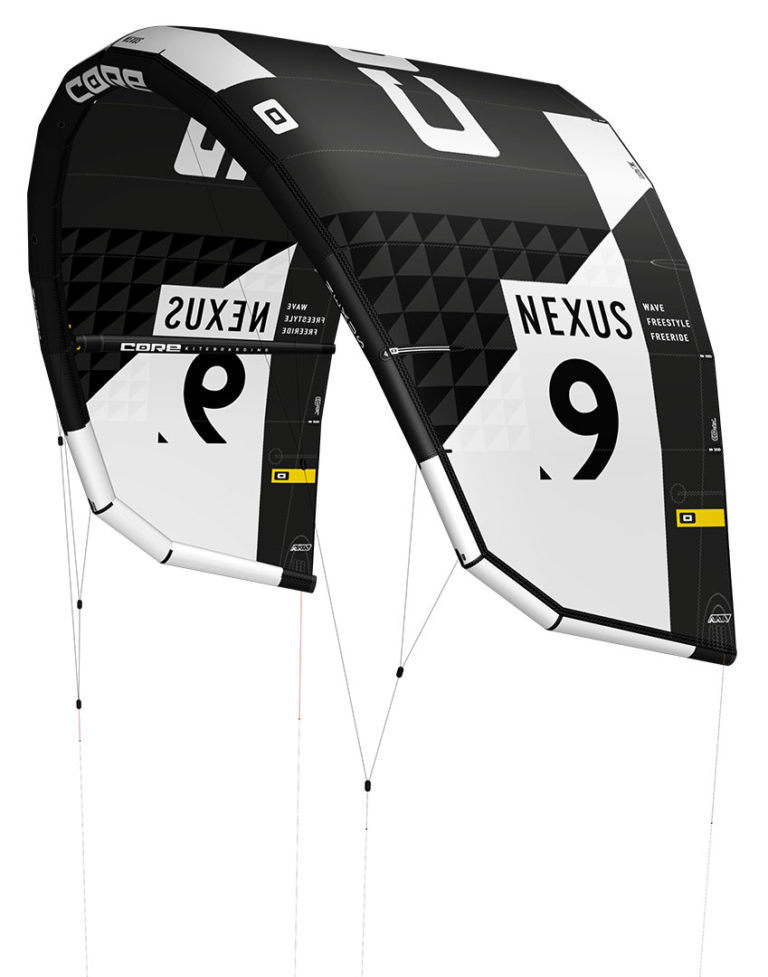 The Nexus has replaced the former Allrounder Free since its release. As a crossover between wave and freestyle, the aim was to pick up as many riders as possible without overtaxing beginners and intermediates. With a big bang the Nexus hit the market and convinced not only us. With its precision and good-natured nature, coupled with enough power for any nonsense, the Nexus was and is our first choice for all risky, dangerous and new conditions. A glider you can easily rely on in any situation and at any time.

The hard facts, quality & manufacture of the Core Nexus 2

Furthermore, the Nexus is available in sizes between 4 square meters and 17 square meters. You have to put between 1169€ and 1999€ on the table. This means that the Nexus 2 has become more than 50€ more expensive than its predecessor - but there are a lot of new features. The first one is the new Dacron material. As with the X-Light, the Nexus 2 now also uses the ExoTex material. A much lighter and stiffer Dacron. In addition to the processing on the front tube, the struts are also made from ExoTex Light. All in all, the umbrella has become lighter and more stable. By the way, the flying cloth still consists of the Triple Ripstop, which Core has been known for over 2 years. However, something has changed here as well. The curvature and tension of the cloth has been changed significantly. The highest point of the cloth curvature behind the front tube now sits a bit further back and higher. This provides more lift, just like an airplane wing, and therefore more drift when kiting. So all foil and wave friends should be happy here. The wider tips are also used here. The more tip surface gained in this way improves the directness considerably and also improves the response, the dynamics, if you like. Also the reverse start with little wind on the foil should work even better. But enough of the theory, how does the kite behave on the water?

The performance of the Core Nexus 2 on the water

Fortunately, the innovations did not change the complete characteristics of the kite. The Nexus is still an extremely good-natured and fast triple hawser with an explosive power development, if you like. Also the balance of the kite on the front and back lines is still incredibly comfortable and good. It is actually noticeable that the steering behaviour has become a bit more sporty and above all more direct. Not unpleasantly fast, but much more predictable and precise. In this context loops are now even safer and more radical to jump. But also in the wave the whole thing has become clearly noticeable. Turning in before the bottom and top turn now works even better. Especially in the fast and chaotic waves of the Baltic Sea this is a big advantage. And while we are at it, if you don't catch the right moment, the really improved drift behaviour helps a lot and brings the glider straight back to the front. We are already looking forward to the first "down the line" day. However, the new features are not yet as important as we thought. But it should be mentioned that we never had any problems with the Nexus 1, neither in the waves nor on the foil.

Evolution instead of revolution is the keyword here. Improving a glider that hardly anyone has had anything to complain about is an art in itself. Getting the whole thing done in such a way that you think you can't do without it - that's incredible. For us, the turning behaviour is clearly the biggest and best innovation in the Nexus 2 test, and continues to point the way forward for the all-rounders. Crunchy, fast three-chucks with a MediumAR and the easiest possible performance to retrieve.
All features that were not explicitly mentioned in this test have hardly or not at all changed from the predecessor. So the low and high end, the upwind and the jumping characteristics are still simply "nexuslike".