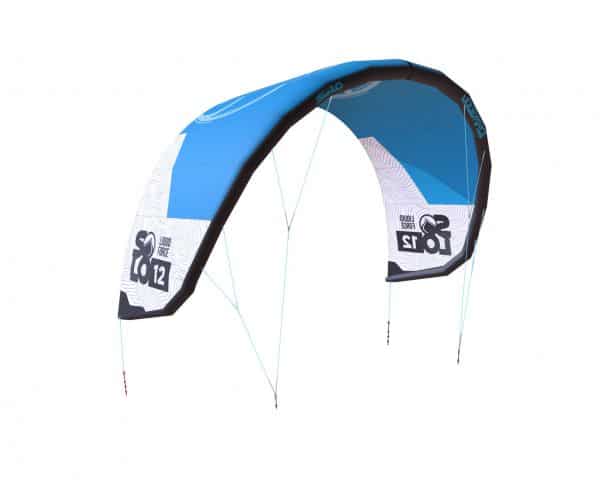 New solo, new bar: Liquid Force not only gives the 2020 solo a comprehensive redesign, but also an adjustment option via the bar that makes it more variable than before.

Liquid Force has worked hard on the solo for the 2020 version. The canopy is flatter in the middle segment and slightly wider open than on the predecessor. In addition, the profile was designed cleaner. The wingtips are cut wider than before. And in order to support the newly designed canopy properly, the bridle has been modified. The Leading Edge is kept very narrow to reduce weight, which we also know from NV and Wow. We also added lighter bladders and a minimalistic Dacron frame. Liquid Force also has an innovation for the bars. The Direct Drive Control System features a backline trim mechanism at the end of the bar spar, similar to Duotones Click Bar. The bar is not a LF proprietary development, but is from R3 Designs and is also distributed by other manufacturers. Powering and depowering is done by a small wheel that can be turned (power) or pushed out (depower), pulling the steering lines into the bar spar or letting them out. Although the system is open at the bottom and theoretically susceptible to foreign objects, we had no problems with it. The only thing that might be more visible is a visual indicator that shows the power or depower status.

Performance on the water of the Liquid Force Solo

The new design suits the Solo well. Because that is exactly how it stands in the air. Due to the one-strut construction on the bar, the Solo wants to be properly guided at the pull point to be flown on cleanly, but most of its competitors have no other choice. In addition the Solo scores with a good cloth tension. Pronounced flutter is only possible in a very depowered state. The thin profile looks surprisingly stiff, but should not be inflated too laxly. And the Liquid Force does not show any stalls either, neither forward nor backward. That's exactly how it should be!

The Direct Drive Bar feels a little more saturated and comfortable in the hand due to the bar geometry and the base. But even with the Mission Control Bar, the Solo works as it should. Both bars come with the new Y-Splitter, which allows the position at which the center lines split to be varied freely in height. This has a noticeable effect on both the bar feeling and the turning behavior. The deeper the splitter sits, the richer and more direct the bar feeling. The holding forces of the Solo are below average. You don't have much in your hand, but you can still feel the kite well. If you are used to kites with higher bar pressure, you have to adjust to this briefly.

Again, the solo is variable depending on the splitter position. In the lowest position the kite turns a bit slower and in larger radii. If you push the splitter about five meters upwards, the radii become noticeably tighter and the kite tells more. We found this to be the better setting for foil use, as the kite gains agility. Freeriders will rather prefer a lower position. For technically inexperienced customers, position markings on the line would be a practical help. The flying speed is consistently high. The narrow front tube and its thin profile make it one of the fastest kites in this group. Especially advanced foilers appreciate its sporty, crisp handling.

The solo is not a powerhouse. It generates its power rather through the speed of flight and has a relatively low natural base. In the low end it wants to be accelerated with sinus curves before you reach the necessary speed to fly it in a posed way. This is less important on the foil than on the twin tip. On the other hand, it scores with large reserves in the high end; even with overpower, the solo can be kept in check relatively comfortably. Its depower works well, although not quite as linear as the competition. If you move the bar too far forward, it starts to flutter more strongly at a certain point and the reactivity decreases noticeably. It swallows gusts good-naturedly away. When running upwind, it moves extremely far to the edge of the wind window. Especially on the foil enormously acute upwind angles are possible. On the Twintip you have to power it a bit more and fly it deeper in the wind window to get enough propulsion. On the Relaunch it doesn't afford any weaknesses either and is just behind the Boxer, which can be peeled out of the water a little faster.

The Foil Suitability of the Solo

For foiling, the Solo is a real fun package. It can be finely dosed, the low bar forces suit the area of application and the sporty overall package radiates a pleasant lightness in handling. If you push the Y-Splitter further down, it takes away some of the fun of foiling, but gives you more bar feedback. That is a matter of taste. Only on deep space wind courses it requires a few position corrections in drift, otherwise the line tension becomes too low and the controllability decreases too much. In maneuvers it reacts quickly and directly to steering impulses.

A fun kite that challenges, but never overtaxes. The playful, smooth handling is perfect for foil use. Foil beginners and freeriders miss some basic pull and low end power. You have to compensate for this by flying speed and technique. You should play a little with the Y-Splitter until you find the right mixture of turning behaviour and bar feedback.

Here you can see the official Liquid Force Video of the Solo: