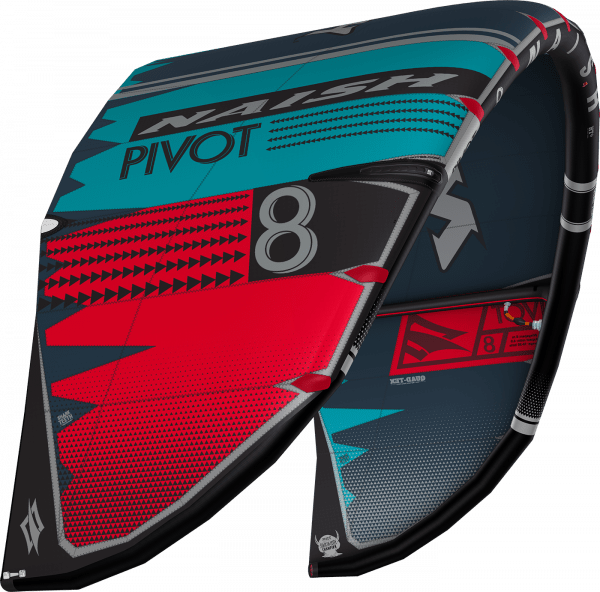 Kevin Langeree's work equipment has catapulted him to become the king of the skies: Naish's 2020 pivot plays at the top of the Champions League of Big Air freeriders.

In January 2019 at the King of the Air in South Africa, Kevin Langeree showed what the pivot is capable of by winning the prestigious event for the second time in a row. If the King of the Air prefers the kite marketed as a sporty all-rounder to the freestyle kites in the range, in order to make the most radical kite loops into the sky above Cape Town at a height of almost 20 meters, the Pivot must have some performance reserves for big airs in reserve. How much power will be left if we hang a normal mortal KITE Tester on the bar instead of the exceptional athlete? Naish has been very careful with the construction. In the 2020 models, the Hawaiians do without the Octopus Inflation System and use a conventional one-pump instead. Naish also changed the valve. From now on, the kites will be inflated and deflated via an SUP valve with a pressure spring.

The pivot stands like nailed to the sky. The framework appears extremely stiff. Nothing flutters and every centimeter of the cloth seems taut. The feeling that the pivot gives, actually suggests a five strut kite. Especially when the wind force is higher than necessary, the taut suspension makes itself felt positively. If you stand on the edge with a lot of force and the bar is permanently moving on the last quarter of the depower tamp, the pivot still delivers even and predictable pull.

At the same time it has a bit more power on the bar than most other kites. It uses this power to give the pilot excellent feedback. Feeling the sweet spot on the depower roping goes without saying and the feedback on the dosage of the depower can hardly be topped. The relatively high steering forces reveal the same pattern. You have to pull a little harder to set the pivot in motion, but you always get the status of the rotation via the spar. The forces are above the other kites in the test, but not yet in the red area. You can easily fly sinus arcs with the pivot without having to train in the gym.

The twelve-pivot looks slightly smaller compared to the other candidates in the sky. And that's how it flies: fast as a whip. It turns a bit faster than most of the other kites in the test, except the Bandit. The pivot rotates cleanly with clearly defined feedback and power development.

The performance on the water

The pressure build-up during maneuvers, gusts and powering up is very predictable, so the pivot rarely presents unpleasant surprises. The good feel coupled with the taut flying characteristics make kiting easy even in difficult conditions. In the low end, the three-strutter has to line up behind the leading group with five ribs, Switchblade and XR6 provide much more basic pressure. Usually typical profiles with three struts are no fans of overpower and eventually shut down. The profile of the pivot, on the other hand, becomes more lively as the wind increases and the limit is not set by the kite but by the weight, power and skill of the pilot. A little bit of power is also needed for the relaunch. With more wind, the pivot tends to straighten up fully and twitch strongly again just before the supposed launch, tugging at the upper line with unexpected force. If you don't counter here, you have to start all over again.

The good predictability of the maneuvers also covers jumping. You get exact feedback directly before the jump about how the jump will turn out, which is extremely helpful when planning tricks. In a comfortable cruiser wind the pivot is very easy to jump and looks generously over smaller steering or timing errors. The margin for error becomes smaller the stronger the wind gets, but the pivot remains very easy to jump even in big air. However, the glider then releases power peaks, as one would expect when launching space rockets. The pilot is picked relatively gently from the water for a short time, but then it pulls you up. You should be prepared for this with a certain amount of body tension, so that the jump is not ruined by the moment of shock. At the absolute jumping height the pivot can secure the first place with a gentle lead over XR6 and Rebel. In hangtime it is behind the specialists. But whoever jumps so high, inevitably flies around for quite a long time.

The Naish Pivot is a very sporty all-rounder with enormous potential for big air maneuvers. High jumps are easy to execute and driving with overpower is positively supported by the precise and slightly forceful steering. If you want to practice new maneuvers while there is a gap of more than ten meters between board and water surface, you should definitely take a closer look at the Pivot. Naish fans, for whom the pivot is too sporty, turn to the new Triad.