The 2021 version of the Rebel is now also equipped with Duotones Flex Struts. These are supposed to have a positive effect on the turning behavior and make the powerhouse a little more easy to handle.

Duotone has given his 2021 Rebel more than just a facelift. The latest version now comes with the Flex Struts, which we already know from other Duotone models. The promise: The Struts are not stitched all the way to the canopy, so they can twist a little better and allow the canopy to twist more. The two outer struts were designed as Flex Struts, while the center and the two upper struts are sewn in the classic way. More torsion means more twisting. The geometry of the canopy has also been slightly modified. In addition to further fine-tuning and detail improvements, special attention was paid to a lower overall weight. Since Duotone changed its flying lines on the bars and thus also the bridle lines in model year 2021, the new Rebel comes with the thinner and less stretchy Flite99 lines from Robline 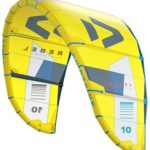 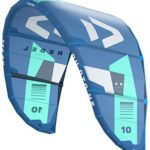 The Rebel performance on the water

As usual from its predecessor and therefore not surprisingly, the flight stability of the ultra-stable five-strutter is exemplary. Even the Flex Struts do not change the fact that the Rebel is indestructible in the air, has a consistently high cloth tension, therefore does not flutter and leaves an extremely rich first impression in the sky. If we had been able to tickle out one or the other small front stall in early Rebels, especially in gusty conditions, there is no longer any sign of this and the canopy looks perfectly balanced.

At the bar you immediately get the typical Rebel feeling. Here the new one is largely comparable to its predecessor, although after a few sessions you notice that the stiffer lines have a positive effect on reactivity and feedback. It feels a bit more pithy. The good mixture of directness and a comfortable setup with a clearly perceptible but still big sweet spot remains. Its steering and holding power is still in the upper midrange.

The basic characteristics of the Rebel remain clearly recognizable, but the effects of the Flex Struts are clearly noticeable in the form of increased turning pleasure. This not only makes it feel more pithy, but also allows it to be steered into tighter turns. It is noticeable how directly it responds to steering impulses. The turning speed is in the midfield between soul and pivot, but for a five strutter it is pleasingly high. So the concept works. It even turns loops fast and evenly with a slightly progressive power build-up, which can be easily regulated via the bar.

The Rebel has lost nothing of the performance and strong basic traits that have distinguished it up to now. We can't say for sure if he could improve in the low end compared to his predecessor. But one thing is certain: Compared to the competition, it offers a very good low end. With a little riding technique, a big twin tip and not too many kilos on the ribs, you can start at just under ten knots. Despite its strong character, the twelve-pointer offers massive reserves towards the top. The feel-good range goes at least to well over 20 knots for most weight classes. It is noticeable that it seems to have a little more line tension when fully depowered. This has a positive effect on the controllability, but at the same time it takes away some of the depower ability in the absolute high end, although this is of little importance with the huge wind range. The Rebel also doesn't show its face when running upwind. It flies far to the edge of the wind window and produces there full propulsion like a V8 engine. The depower works very linear and is intuitively easy to control. Anyway, the whole handling is pleasantly uncomplicated, so that the Rebel is also manageable for beginners and intermediates. The relaunch succeeds for a kite with such a high aspect ratio fixed. The only point of criticism, however, is related to the bar and is not new: After releasing the kite blows out well, but when assembling it, it can happen that a steering line gets tangled up with the V-distributor. This can also be noticed from time to time when launching the kite on land, but the problem can usually be solved with a little pulling on the lines.

Jumping with the Rebel is simply fun. The kite seems to have an automatic boost guarantee built in. Even if you have no idea how to set the edge correctly when jumping, you can reach considerable heights just by steering back and pulling the bar. Due to the faster turning behaviour and the higher agility the jumps have become even easier. If you hit the jump with the edge fully, you can take the express elevator to the top floor. The hangtime is also outstanding. In addition, it is noticeable that the Rebel is always easy to feel in the air and does not tend to fly over, so that jumping underneath has less tragic consequences.

Summary of the Duotone Rebel 2021 Test

The Rebel manages the balancing act of enormous performance, easy handling, amazing turning pleasure, high agility and outstanding jumping characteristics. With this, it has gained even more in handling and is right at the top of the list of high-performance freeriders.

Here you can find the official video of Duotone for Rebel 2021:

is this review sponsored by duotone ? not a single negative comment im impressed

Hi Charles,
thanks for your comment. In general none of our reviews is sponsored.
In my opinion the Rebel is a great kite, if you have noticed any negative aspects, feel free to write them in a comment.
Greetings, Silas