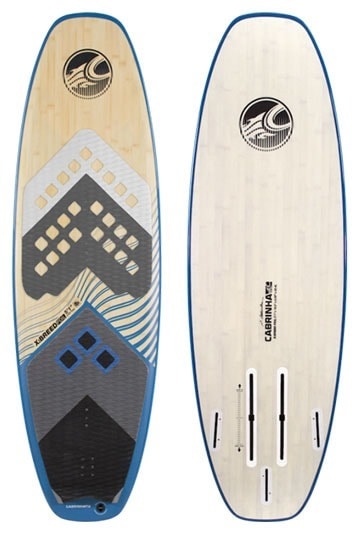 One board, two applications: Cabrinha's X:Breed Foil is a Directional with Foil pick-up designed to connect both worlds.

Cabrinha is the only manufacturer to offer an X:Breed Foil, a surfboard that can be used with fins as a surfboard or a foil board. This could be a clever solution for customers who want to cover both applications with just one board. The board has a classic cut-off nose shape with a stretched outline, so it can be used with fins, especially in small and medium waves. We have tested the board exclusively in the foil setup with the Hi:Rise-Lift-Foil-Set. Cabrinha uses a three-ply construction of basalt fibers that encase a pauwlonien wood core for the front wing. The Stabilizer is made in composite construction. Another new feature is the lighter and hydrodynamically optimized fuselage layer made of anodized aluminum. The mast mount can be used in a rail system in the board as well as with a classic four-point mount. In addition, the inserts have been reinforced and the mast has been sealed so that no water can penetrate, which improves buoyancy and reduces weight. The wing is stretched with a medium aspect ratio. Tools, assembly paste and protective covers for the foil are included.

Performance on the water

The board is long, but relatively narrow, so that the handling is easy even in deep water. However, the Cabrinha is the only board that has loop inserts in the middle, while most other boards offer options for a centered or v-shaped stance position. When the foot is in the loop, the board can be easily lifted up thanks to the buoyancy aid of the mast. Standing up is the same as with a conventional surfboard. Its high volume and long nose give the X:Breed enough buoyancy so that you can put a lot of weight on the front foot without the nose dipping towards the bottom of the sea. This is more forgiving than with the much shorter purist foil boards. Also, the Directional's well gliding underwater hull helps to build up speed in controlled displacement. If you keep your weight slightly in front, you can push the foil down without any significant effort and keep the board on the water surface until you decide to switch to foil mode. Beginners find the lift, which starts a little later and very moderately, pleasant. Other foils push up already more vehemently with less speed, which has some advantages for the lower light wind range. The Cabrinha comes a bit later, but it is not overstrained. The board can be trimmed a little bit with the mounting position. The further forward the mast is placed in the rail, the more sensitively the board reacts to pressure on the rear foot and thus starts flying a little earlier. However, the nose then also points a little more upwards during the ride.

After a moderate lift, the Hi:Rise Foil runs pleasantly smooth and stable. The pilot does not have to fear uncontrolled pitching or rolling movements, as long as he does not make any clumsy load errors. However, the board requires a more precise stance due to the narrow center width. The whole system feels well controllable and runs straight ahead very well. But the Cabrinha's steering is a bit more subdued and not as direct as the more sporty competition, which is probably due to the much larger board. The long nose is very merciful in catching touchdowns. The board doesn't cut and the pilot can usually start filing again directly. The wing has a high tolerance range for stalls and you can feel when the angle of attack is too steep or the speed is too low. The extreme early gliders of Naish, Liquid Force or Slingshot are a bit more forgiving and can be filleted even slower without tightening the nose too much. If you step on the gas pedal with the Hi:Rise, medium high speeds can be reached. It accelerates nicely, but is not as lively and fast as the much smaller RRD wing or the Duotone. The usable speed range is therefore slightly smaller than the average. While the Cabrinha can be maneuvered in a precise and controlled manner, the implementation of steering impulses is delayed by the blink of an eye. This too should be more direct with a smaller board. Clear steering commands are preferred by the X:Breed. Jibing, turning and foot changes are relatively easy with this set. The stall point is low enough to ride carefully into the direction change, but you should pay attention to sufficient line tension, because it does not hold the speed without pull in the kite as long as Moses, Naish, Liquid Force or the Slingshot. In addition, it turns rather larger radii without more energetic weight shifting, which is what beginners prefer. When changing feet, you have to be more precise than most because of the single loop in the front and the narrow deck.

The set of Hi:Rise Lift and X:Breed Foil is a solid mix of directional for the wave and foil set-up. If you only want to buy one board for both applications, you will get a well-balanced package, but you have to take into account small sacrifices in agility and the less sporty riding characteristics. With a smaller board the wing should gain reactivity.