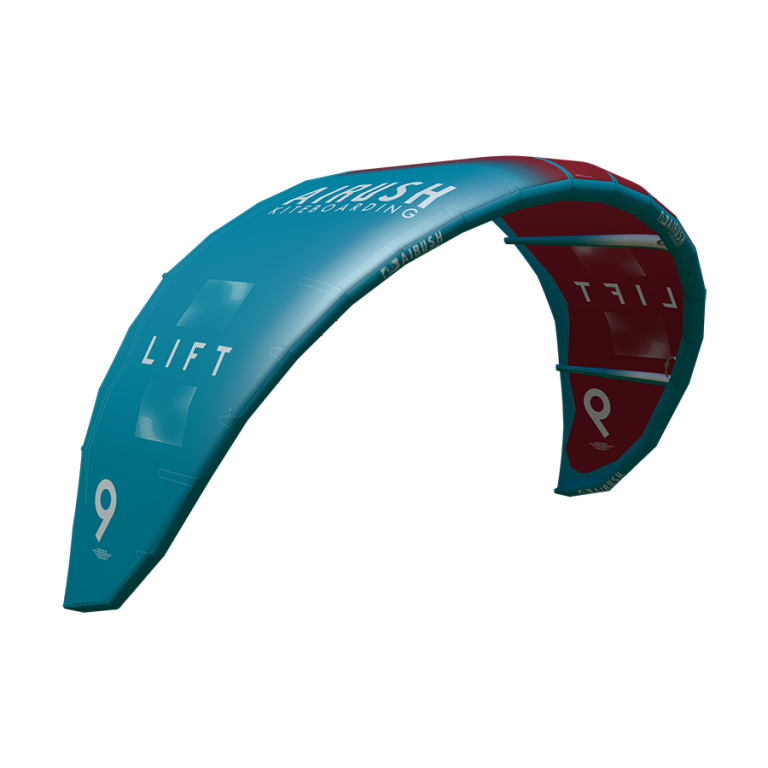 The rebirth of an old acquaintance: Airush Lift 2021 in Review

Airush brings out the brand new Lift and wants to finally participate in the segment of big air and hangtime kites. The name is not unknown, in the past there was already a lift, which has only little to do with the current one, however.

Airush brings with the Lift an exciting new release, although the name is not new: The kite was already once in gray kite prehistoric times, now it has been reactivated after 13 years. However, the new Lift has hardly any similarities with the old one. Only the field of use remains the same: big-air performance and hangtime.

For this, Airush designer Mark Pattinson makes use of the good old five-strut platform, which forms the framework for the stretched kite with a relatively high aspect ratio. The shape of the canopy is relatively wide open and runs swept with round, tapered tips - a typical performance freeride shape. Technically, Airush relies on its proven Load-Frame technology, which is supposed to give the canopy more stability and better power distribution in the cloth. Technoforce D2 Double Ripstop from Teijin is sewn as the flying cloth. The construction appears to be of high quality workmanship and features reinforcements made of Kevlar or polyurethane in all stressed areas.

Special feature regarding the bar: the lift can be flown in two modes, either high Y or low V. The geometry of the front lines can be adjusted via a separate splitter and influences the handling as well as the turning behavior.

Airush Lift 2021 is available in two colors - red and black. The differences can be seen in the following pictures. 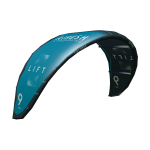 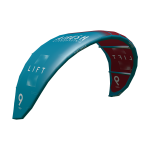 As soon as the Lift rises into the air, it becomes clear that this kite was built for a lot of wind. This does not at all mean that it would tip out of the sky with little wind - on the contrary. But you can immediately feel the stiff framework of the canopy, which stands as if nailed to the sky. The canopy tension is exceptionally high, so the profile doesn't wrinkle at all. Even fully depowered, almost nothing wobbles or rustles. Gusty conditions can't harm it, and backstall tendencies could only be elicited minimally in the lowest wind range.

Such stretched shapes often tend to have a rather leisurely turning behavior. The Airush does not outsmart the limits of aerodynamics, but it is still one of the more agile hangtime kites and thus feels much more compact than the canopy actually is. The lift turns clean and round in medium radii. If you turn it in sharply, you can even force it into - for this kite class - surprisingly tight radii. The flying speed is consistently high, so that it appeals especially to kiters who place increased value on agility and precision.

Typical five-strut also has the lift an enormously large wind range. However, you notice that the shape is rather designed for higher wind speeds, because in the high end it offers significantly greater reserves than in the low end. Nevertheless, the basic draft is solid. Pleasant is the low cross draft. It flies far to the edge of the wind window without any significant effort and produces steady propulsion without stuttering. It is easy to control via the bar thanks to its pronounced sheet-and-go capability.

Thanks to the high flying speed and its direct control, you intuitively find the perfect jump moment. When flying back, the kite produces little lateral pull, so that the jump is easy even without much lard in the thighs. It even acts quite forgiving, because the sweet spot at the jump is pleasantly large. Although it can't keep up with the much faster Bandit in the loop, the smaller Lift nevertheless turns the loops cleanly and roundly with a controllable leeward offset, so that even loop beginners aren't overchallenged.

Direct kite that offers a lot of power, but is still uncomplicated to fly. Beginners are not overwhelmed, but you should bring the necessary skills to be able to call the enormous potential of the lift. Target group: Big Air junkies and sporty freeriders.