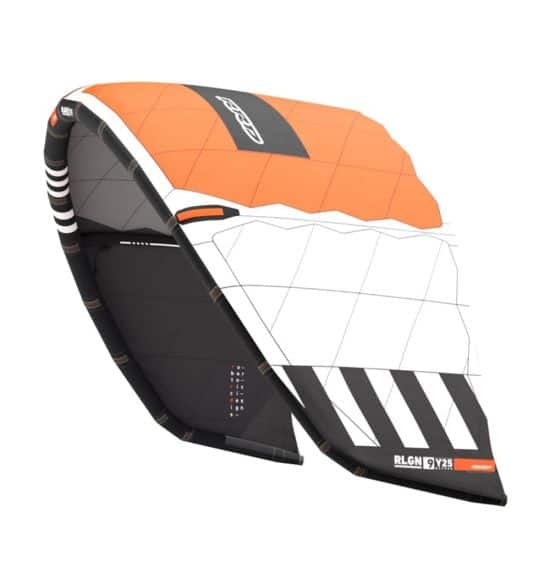 In this review we introduce you to the RRD Religion Y25. The Religion is the Italian sports car among wave kites. If you know how to control it, you get maximum performance. However, it does not tolerate hesitation at the bar.

For the tenth edition of the wave classic Religion, which is also part of the Y25 anniversary collection, the Italians have taken the Religion, which was heavily modified last year, as a basis and fine-tuned it. The Religion shape is striking: a relatively high aspect ratio is combined with wide, strongly swept tips and the rounded leading edge. The smaller sizes differ from the larger ones even more: Four to eight are equipped with pulleys in the bridle to better handle gusty strong wind conditions. Sizes eight to twelve, on the other hand, are directly suspended and have an even higher aspect ratio to deliver more speed, power and reactivity in the lower wind range. On the bridle, the religion can be adjusted in two different modes between wave and freestyle wave. When it comes to workmanship, RRD makes no compromises. Protectors at all chafe points, a generous Dacron frame, the reinforced leading edge and elaborately crafted seams should give the Religion a long life and also survive tougher washes in the wave.

Flight stability of the Religion

In terms of flight stability, the Religion Y25 made slight gains over its predecessor. Although the canopy has not been fundamentally changed, the fine-tuning of the suspension seems to have largely eliminated its susceptibility to backstalls. The canopy appears extremely stiff and is stable in the air. Neither does the profile show dents, nor does the kite wiggle uncomfortably with the ears. However, especially with the Fiver, you can feel that the Religion resembles a high-powered sports car that is just waiting to finally be allowed to shoot off.

The Religion's exceedingly powerful character is clearly noticeable at the bar. It hangs on the steering lines a bit more than most competitors, so bar forces are slightly above average, though not uncomfortably high. The thin bar spar lies quietly and well in the hand, so that the pilot does not notice any vibrations from the kite. The clearly defined sweet spot can be felt in every flight situation without any problems. However, the kite wants to be flown precisely at the sweet spot, because it reacts sensitively: if you overdraw the bar, it steps on the brake, if you push it forward, it ignites the turbo. Experienced kiters with the necessary sensitivity can use these characteristics to their advantage. For wave beginners, it might be a bit too sensitive on the throttle.

The performance of the RRD Religion on the water

Super tight turns are the specialty of the Religion. Similar to the Carve, only even more agile and with more steam, it can be braked over the bar if desired, lightly spinning almost on the spot, and then shooting forward. It only needs a little steering impulse and it changes direction. The flying speed is dizzyingly high, and even the Section can barely keep up. The Religion turns larger radii quickly, roundly and cleanly - then it builds up powerful pull in the turn.

The Religion produces an incredible amount of power. The enormous basic pull gives it an advantage over the competition in the low end, but the comfortably usable wind range is smaller than with most other kites in this group. The depower works efficiently and offers an on-off rather than a sheet-and-go feel, but the Religion quickly reaches its limits in the high end. Completely depowered, the tremendous reactivity decreases noticeably. In the right wind range, the Religion works excellently, but when it gets to the limit in the high end, it gets a bit uncomfortable, especially for lighter riders. The powerhouse also converts gusts very directly into propulsion. The stretched canopy can convert the enormous propulsion into excellent downwind angles when running upwind.

In the wave, you should pay more attention to the right size choice with the Religion due to its powerful characteristics than with the comfort-oriented wave kites of this group. If you like it powerful, you can ignite a real down-the-line firework with this bundle of energy. Co-steered in sideshore conditions, the Religion can be chased through the wind window more radically than any other. It turns fast and tight and shoots forward at breakneck speed after the turn. However, you have to be careful to keep control during the explosive power delivery. Light riders and wave climbers might find the Religion too powerful. In side-off conditions, its high airspeed also helps it. Here, it's better to choose a size smaller to avoid being pulled out of the wave overpowered. In side- to side-onshore it shows a good drift, if you don't fly it too low. Otherwise, the wave high-flyer develops slight downward tendencies. If the position fits, it floats along very stably and can be reactivated in fractions of a second with a minimal impulse at the bar.

As sporty as a high-powered Italian race car: The Religion Y25 combines immense power with dizzying speed and turning pleasure. If you're looking for a highly agile wave specialist, you might be right here. The power development is enormous, but the wind range is limited. A little sensitivity at the bar and flying technique are necessary to be able to exploit the immense potential of the Religion.

The following kites are part of the RRD Y25 Collection:

Good review. Finding the kites too powerful and difficult to control in gusty conditions, overpowered quickly. Prefer my older models

Very good low end indeed and the high end and control in gusty conditions improves a lot when you shorten the lines to 20 meters. I love these !

How does religion behave at very gusty off-shore conditions?..I mean how easy or not backstall/frontstall in comparispn with other RRD models like Addiction?