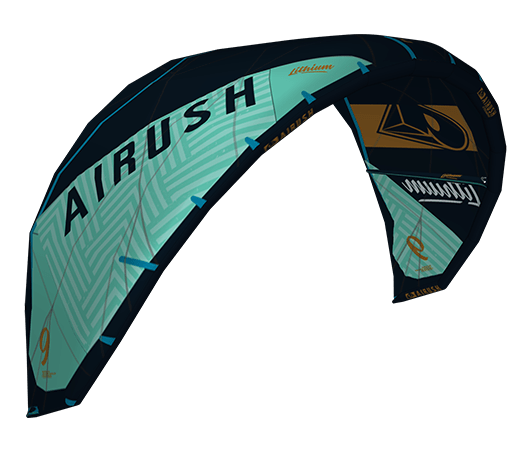 When a kite polarizes and inspires so much, and that for years to come, then it is definitely worth considering offering it in different equipment versions. This is exactly what the clever minds at Airush thought, which is why the flagship of the range, the Lithium, is available in three different versions.

At the top of the list is the Lithium V10 tested here, which shows all the equipment details that the development department of Airush has to offer. For training purposes or simply for all those who do not want all the technical features, there are two models, Lithium Progression and Lithium Progression PLC, which have been slightly slimmed down, but are also around 350 and 250 euros cheaper than the premium version of the same size. The Lithium Progression does not use a double ripstop cloth but a single ripstop cloth, no one-pump system is used, the kite bag is more purist and the front tube has a conventional valve instead of the XL Boston valve with its large diameter. In terms of the shape, however, the three do not differ. Since this differentiation of the lithium range only took place last season and all three models met with great enthusiasm, no major changes were made for 2019. Most importantly, the Lithium V10 is now available with the high-quality Deluxe Bag, which is made from 100% recycled polyester.

Performance on the water

The Lithium is uniquely powerful in the lower wind range and is without doubt one of the high-performance freeriders with the best low end. Targeted into the wind window, it quickly delivers constant propulsion and can be flown early in the flight. This glider also has no lack of depower, which means that the overall wind range is very large. The controllability can be described as outstanding. Hardly any other glider on the market convinces with such a stable stance in flight, even in strong gusty winds, which is due to the latest generation of the Load Frame. At the same time, this enables an incredibly crisp and direct bar feeling, underlining the sporty side of the Lithium. Beautifully direct and with a decent airspeed, it reacts to control commands and impresses with constant power. Round and in tight radii the Lithium masters turns, which gives it great fun potential for wave sessions. Hangtime fans are also fully satisfied, because with a full lift the glider takes the rider to the top floors. With its distinct carrying capacity it is one of the strongest hangtime kites in this kite category. For unhooked manoeuvres it positions itself low in the wind window and convinces with a strong pop. The reduction in pull is not as pronounced as advanced unhooked pilots would wish, but they are not the main target group either. The waterstart is very easy in every situation.

It is hard to criticize anything about this kite, but it is much easier to praise it for its perfection in the highest tones. Whether cruiser or performance freerider, the Airush Lithium is a very good choice and is without a doubt one of the strongest in its class.