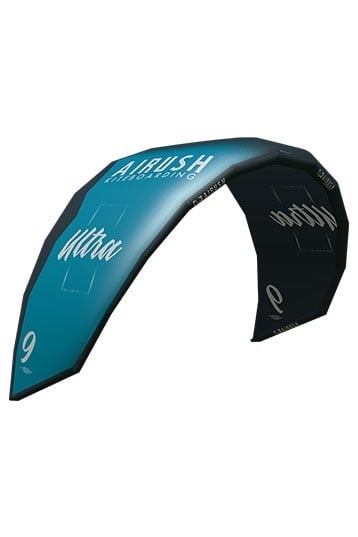 The ultra-light kite revolution is in full swing - not for nothing due to the foil boom of recent years. With the original Ultra, a freeride single-strut construction with light wind and foil genes, Airush were on board quite early. Now it continues with the Ultra V4, which has been revised and improved in many areas.

Compared to the previous version, the Ultra V4 has received some changes. These include a revision of the canopy, here the tension and durability have been improved to increase the reactivity. Let's be honest, the canopy of the previous version was already very good, so the revision will hardly be noticeable for most.

In addition, the weight could be reduced due to the single strut construction. This makes the kite even more efficient, especially in light wind, without losing stability.

The Airush Ultra performance on the water

The canopy is tight and balanced, which keeps the kite basically well positioned in the wind window. At the lower limit of its flight capacity, it drops and luffs pleasantly predictable and can be easily intercepted by a little edge use - in other words, typical low-end disasters can be prevented so well. Practical especially when foiling in onshore conditions with small waves! The entire construction is designed for lightness, but at the same time well thought out.

The Ultra has significantly extended wingtips with attachment points directly at the tips, which is good for both recumbent tension and trailing edge control and turning speed. With proper leverage on the wingtips, you can watch the canopy twist and the kite react. Compared to its stablemates from other brands, the Ultra has far more aspect ratio, much more C-shape, and feels less ponderous. It should also not be underestimated in the waves: The lively handling and its innate drift allow it to still perform respectably there, where other kites of the same size often become a bit ponderous. As is common with lightweight single-strut kites, the Ultra shines on the low end.

The Airush Ultra V4 is a light, playful and fun kite with excellent light wind performance - exactly what you would expect from a single strut kite.