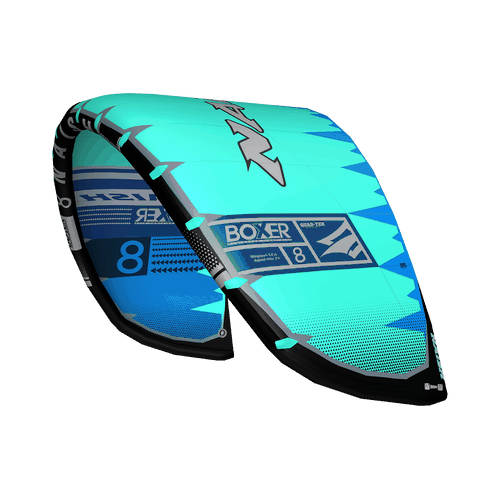 Naish Boxer: A Review of the "Everyones Darling" Kite

One-strut is only good for foilers or freeride beginners? Naish proves with the Boxer how wide the range of use can be with only one strut - a successful balancing act.

The cult brand from Hawaii around Robby Naish builds here a lightweight onestrutter for foil. Over the years, he has built up a large fan base. Naish has already scored a lot of points with his one-strut all-rounder.

The construction has not changed much since the last model: Stiff Quad-Tex cloth and a very tightly inflated front tube stabilize the cap. In addition, the weight of the canopy has been reduced somewhat and the aerodynamics have been revised. Since Naish has different launch cycles for its kites, the Boxer still has the conventional valve for the wide plastic adapter. In the next generation, the Boxer will then probably also be converted to the new SUP valves. Otherwise, it is equipped with two tie-on options on the tips as well as the typical Naish water outlets in the outer cloth segment behind the leading edge, which should simplify the relaunch. The workmanship looks robust and high quality, as we are used to from Naish.

Hardfacts, Quality & Processing of the Boxer

The Boxer is available in sizes between 3.5sqm and 16sqm. Thus, the right kite should be found for every requirement. The price of the 3.5 square meter Boxer is 870€ and the 16 square meter Monster is 1599€. For the price you get then a highly modern and perfectly processed wing. As with all other Naishkites, the Boxer is made with Quad Tex Ripstop. A cloth with both 4 vertical and horizontal threads. This should provide maximum durability and above all stability. So that you are as fast as possible on the water, a standard SUP valve was also installed - an adapter is also included.

The performance on the water

Neither the nine- nor the twelve-Boxer are noticeable in the first moment that they are only built on a center strut. In the normal wind range, the cloth moves gratifyingly little and the canopy appears super-cleanly streamlined. No jerking, no twitching, no stalls - that's how it should be! Even far depowered angles of attack do not embarrass the boxer.

The boxer does not show any weaknesses in the bar feeling either. Naish strikes a very pleasant balance of low steering and holding forces, but at the same time the Boxer offers very good feedback. The kite simply feels light in the hand and you can feel the always good connection to the canopy. It can be flown quite delicately and precisely with one finger. In addition, even in rough conditions hardly any vibrations arrive at the bar. For the test, Naish sent us the bar with the adjuster below the Quick Release this time. On the one hand, the system is a matter of taste, but to change the trim when heavily leaning on the foil without having to bend the upper body forward, the system is practical. With a lot of steam on the lines, however, you need a little more force compared to pulling the ATB adjuster, Naish's second bar system, where the clamping adjuster sits above the depower tamp.

The longer you have the Boxer on the hook, the more you appreciate its tight and swift turning behavior. The entire handling feels wonderfully playful, but not powerless. It can be turned on the spot and directed extremely precisely, converts steering impulses very directly and is even easy to dose. In comparison, it is one of the more agile kites in this group. Its flying speed is just as high. At the same time, beginners and intermediates are not overstrained by the Boxer. It offers enough sheet-and-go potential to make even inexperienced freeriders glide without a lot of flying technique.

Flight performance of the Naish Boxer

In the low end, the Naish is not quite one of the most powerful kites, which already unleash their power at the slightest breath of air. Likewise, the natural basic pull is positioned comparatively inconspicuously in the midfield, but the rather weak-footed foil specialists again get going later than the all-round boxer. Due to its high flight stability and agility, it can also score on the foil in the lower wind range. One or two turns to accelerate and the kite gets going well. In the high end it shows off its well working canopy. It offers a lot of reserves and can be depowered very well. Even with the bar pushed far up, the kite remains responsive, even if the flutter in the cloth increases. The pull can be dosed very precisely via the depower. Gusts can also be swallowed well with it. When running upwind, it doesn't have any lapses either on the foil or on the twintip and rides in the top group.

Is the Naish Boxer suitable as a Foil Kite

Yes! Due to its agility and balanced, light tuning, the Boxer also cuts an exceptionally good figure on the Foil. Its enormous maneuverability, the low holding forces, the controllability in depowered state and its overall sporty but forgiving handling make it a hot candidate for foil beginners as well as advanced riders who are looking for an equally good foil and freeride kite. If you want, you can really step on the gas with the Boxer on the foil. Here, only the skill and courage of the pilot limit the full-speed riding fun.

The flight behavior paired with the bar feeling and the safety of the relaunch - this package allows you to have fun even under the most difficult conditions and to further develop your skills. The Boxer presents itself as one of the most balanced and at the same time broadband all-rounders of this group. Both on the foil and freeriding on the twintip, it leaves an equally strong impression. A hot candidate for the title of Everybody's Darling!