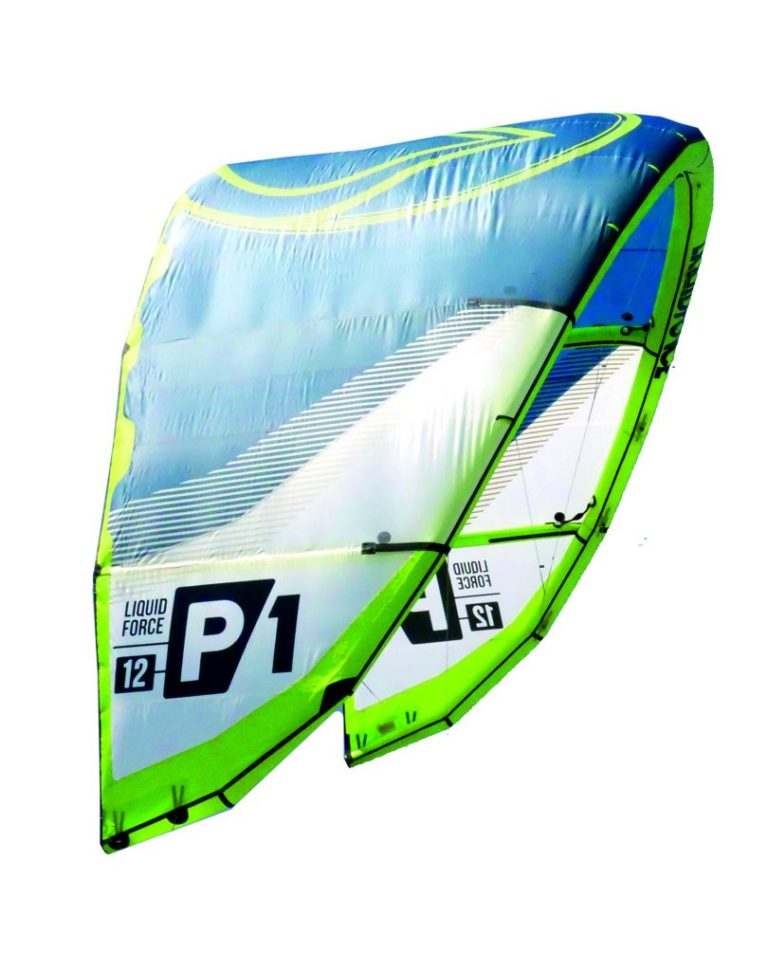 Liquid Force has had a new addition to its family, reviving a business that has not been served since the NRG was abolished. Carefree fun on the water combined with powerful performance and easy handling, that's what the newcomer P1 was all about. The Americans brought Simone Vannucci, an experienced veteran of the sport of kiting, on board for its development. The recipe for success: A strongly swept Delta-Shape, which relies on the high-quality Triple-Ripstop from Teijin and with a five struts framework already optically runs in a completely different direction than the other models from Liquid Force. The five-point balance, which was specially developed for the P1, is particularly light and focuses on the lowest possible flow resistance. With a design without deflection rollers, the developers also ensure direct flight characteristics and good feedback at the bar.

With a powerful basic character, the P1 marches off and wanders far to the edge of the wind window, where it can be flown with good propulsion in a set position. This requires only a small amount of technique to effectively make meters against the wind. The bar feeling is absolutely comfortable. Light steering and holding forces are combined with an outstandingly good feedback, which benefits not least from the very stable stance of the kite in any conditions - thanks to the five struts! In direct comparison to other gliders in this category, the flying speed is slightly lower, which reduces the sparkle, but is beneficial to controllability. In medium radii, the wing flies nicely round without lacking flow continuity or form stability. Even with kite loops it stays true to its shape. It feels most comfortable in the middle to upper wind range, where it can demonstrate its full power. High-altitude flights and a particularly pronounced hangtime are included here. If the glider is led to the jump over twelve, a short ankle is enough with a hearty power-up and the kite pulls the pilot to a respectable height without overstraining. Those who prefer unhooked tricks will find more suitable models in the Liquid Force range. With unhooked tricks, the kite immediately takes up a low position in the wind window and can therefore also provide a powerful pop, but the slack desired by freestylers is hardly noticeable. If a manoeuvre fails and the glider is parked on the water surface, it is sufficient to pull one of the steering lines and hold it for the relaunch. The P1 will then quickly crawl to the edge of the wind window where it will launch willingly.

With the P1, Liquid Force has launched a kite that fills an existing gap perfectly. Finally, there is a genuine high-performance freerider with a wide range of applications available again. Whether it's simple cruising with the good feeling of covering an enormously wide wind range and being able to rely on a precision instrument with excellent flying comfort, or fat big airs with a noticeable extra portion of control - the P1 delivers! A wonderfully powerful and harmonious wing that will make 80 percent of kite surfers happy.