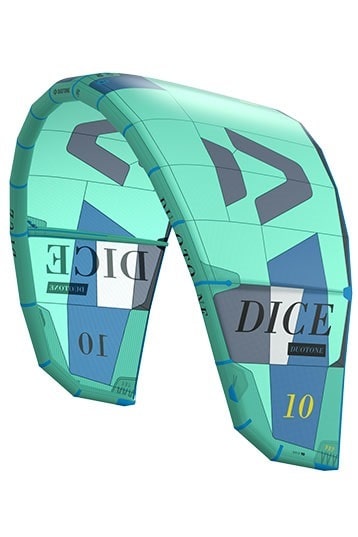 Duotone reduces the weight of the Dice 2021, but the performance remains the same. Our review of the all-round Duotone Dice 2021.

Duotone's Dice has also long been an institution among freeride freestyle kites. After the KOTA workhorse of big-air veteran Lasse Walker had already been heavily reworked in the recent past - Duotone designer Ralf Grösel has, among other things, suspended the bridle without pulleys - the 2021 model was primarily concerned with detail work. Since Grösel, as the driving force behind Duotone's SLS project, has earned a reputation as a material and lightweight construction fetishist, it is not surprising that the 2021 Dice has been slimmed down a little. As with all Duotone models, the new Flite99 bridles are now thinner and have less drag. Due to the reduced weight, Duotone promises a higher reactivity and a better turning behaviour. The Trinity TX cloth and the reinforcements on the trailing edge remain unchanged. If you want to fine-tune the Dice for the respective area of use, you will find three attachment points on the tips for the pigtails of the steering lines: The inside is for freestyle and powerful loops, the middle is for the all-round setting and the very outside is for those who prefer a softer or faster turning behaviour, for example for wave or freeride use. The Dice can still be flown in a four- or five-line setup. But let's be honest: Does anyone still use the fifth line? 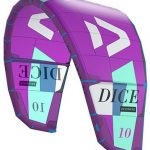 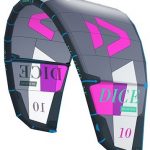 The performance of the Duotone Dice on the water

Duotone also knows how to design kites with excellent flight stability. The Dice is no exception. Perfectly balanced, it requires no trimming in the low to medium wind range to stay neutral. The canopy seems less stiff than that of the GTS or Airush, but damps a little more, so that the Dice feels a little more comfortable despite its sporty character. It does not produce stalls unless you force it to do so. In addition, it doesn't get out of control in gusty conditions - with one small but: on a really bad day with diagonally offshore, extremely gusty wind, the Dice revealed a slightly increased susceptibility to gusts compared to most of the competitors. But as soon as the wind returns to normal, the Dice is in the deep green.

At the bar you feel the familiar Duotone feeling: good feedback, medium, pleasant bar forces that are very slightly above average in direct comparison, and a relatively large sweet spot. The tuning is a good mix of precision and broadband mass suitability. For clear steering impulses, the Dice requires relatively low bar impacts and can be flown very agilely with little effort at the bar.

This also has a positive effect on the turning behaviour. It can be sent precisely into tight as well as wide turns and turns exactly as the pilot wants it to. At the same time, it tolerates a little more force without complaint and can be steered easily even by those with coarse motor skills. Its nimble, agile turning behaviour is striking. Although we only got a twelve and a ten as test sizes, the ten does not really differ much from the nine of the competition in terms of turning pleasure. Both sizes turn harmoniously, evenly and pleasantly round and are also reliably fast in the upward movement. Low weight is an advantage here.

The Dice has one of the most pronounced freeride potentials. This is not only because it is comfortable and easy to fly, but also because of the relatively large wind range. At the same time, and this deserves recognition, the reserves in the high end and the depower are immense, which is why the Dice has the largest wind range. Even when overhacked, the Dice is still well-behaved and can still be controlled properly even when far depowered. Likewise, the upwind run is easy and without flaws.

Jumping with the Duotone Dice 2021

The high freeride potential comes into its own during hooked jumps. Hardly any other kite can be persuaded to jump more easily and with less technical demands. Only the Bandit plays in a similar league here. In addition, there is a surprising amount of natural lift, which you would not necessarily expect from a sporty freestyler. The hangtime is also above average for this kite category. In addition, the Duotone scores with its high level of control in the air. It also knows how to shine in kite loops. The ten loops on a par with the competition's nine: perfectly round and controllable, absolutely suitable for loop beginners in tight radii and with significantly increasing punch in larger radii. Unhooked it doesn't have to hide either, but is a bit behind the very freestyle-oriented competition from Airush, Core or North. The pop is powerful, but lighter riders have to work a little harder in the take-off to elicit larger amounts of slack from the Duotone. If you are too light or use the edge too gently, you will feel residual pull after the jump. Only those who roughly steer incorrectly will tempt it to swerve on unhooked jumps.

One of the most versatile and at the same time most freeride-suitable freestyle all-rounders in this group. Easy to fly, great wind range, excellent handling on hooked jumps - only unhooked others are ahead.